Expect Up To 40% Of Tehran's Population To Be Infected In 2 Weeks: Iranian Health Official

Written by Zero Hedge
Rate this item
(0 votes)
Expect Up To 40% Of Tehran's Population To Be Infected In 2 Weeks: Iranian Health Official

With the daily soaring infection rate and death toll inside Iran officially at 124 deaths amid 4747 confirmed cases as of early Friday — though true numbers are believed much higher — all eyes are on the largely unprepared country given it's the biggest outbreak epicenter outside the virus' origin country of China.

Health officials worry that Iran could be a sign of things to come in the much of the rest of the world — a deeply alarming prospect given a member of Iran's National Committee for Influenza and specialist in infectious diseases, Dr. Masoud Mardani, has just issued a stark warning for the capital city of Tehran, brimming with about 9 million people and over 12 million in the greater metropolitan area.

Dr. Mardai said he expects 30 to 40 percent of Tehran's population to be infected with coronavirus within the next two weeks. 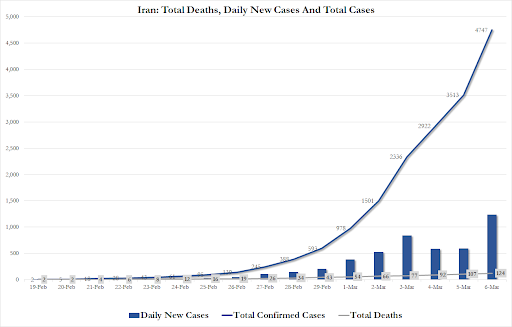 He was quoted in state media as saying:

“Coronavirus is rapidly spreading … we estimate that 30 to 40 percent of Tehran’s population will be infected by the end of this (Persian) month.”

The current Persian month is the last month of the Persian calendar and ends on March 20, Al Arabiya English notes.

According to a summary of his statements given to an Iranian newspaper, he said further:

...an infected person could transmit the virus to four people at the same time. Therefore it is expected that 30-40 per cent of Tehran’s population will be infected with the virus by March.

He pointed out that many Iranians visit health centers and hospitals when they have regular flu, believing it is a coronavirus.

Dr. Mardai is urging people who think they're sick to stay home instead of potentially infecting overcrowding medical clinics and hospitals.

Instead, they should receive treatment at home rather than hospitals in these circumstances. He pointed out that if the patient feels the three distinctive symptoms of the coronavirus; then he must be immediately transferred to the hospital and be subjected to quarantine.

This further means that the next two weeks could see overall global numbers of confirmed cases soar, if his predictions are correct.

Even though Iran's official confirmed Covid-19 cases are in the thousands, it was over a week ago that specialists were already speculating that the true number had already reached 20,000...