The Internet Party One citizen... one vote... zero government interference.
updated 10:50 PM, Jul 5, 2022 UTC
Headlines:
Court won't block Mississippi's abortion trigger ban: A judge in Mississippi on Tuesday denied a request from the providers asking to te
Majority of adults say Washington under Biden hurts : People are losing faith in Washington's ability to tackle their top concerns four
Rising Interest Rates May Blow Up The Federal Budget: Rising Interest Rates May Blow Up The Federal Budget By Jeff Diest of The Mises I
Robert Crimo’s dad liked Second Amendment tweet on: Robert Crimo, the deli owner dad of Robert "Bobby" Crimo III, 22, the person of in
What we know about Highland Park July 4th parade mas: At least six people were killed and two dozen others hospitalized in a mass shooti
Democratic AGs, Soros-backed prosecutors vow to defy: Some of the same Soros-funded prosecutors accused of going easy on criminals are n
Coronavirus Was Found In Italy's Sewage As Early As Last December Tyler Durden Sat, 06/20/2020 - 09:55

There are still several huge key unknown questions related to the coronavirus. For example, how many asymptomatic cases have already occurred worldwide? How long do antibodies last?

And finally, when the hell did the virus actually start to make its rounds across the world?

That's a question that today we may finally have a better answer to. In the latest example of scientists finding evidence of the virus weeks, or months, earlier than previously known, Covid-19 was found in sewage in Milan and Turin as early as December, according to a new study. This was two months before the first cases were officially detected in Italy, according to Bloomberg.

Giuseppina La Rosa, who headed up a forthcoming study from Italy's National Health Institute, said: “Traces of SARS-Cov-2 have been found in samples of waste water taken in Milan and Turin on Dec. 18 and in Bologna on Jan. 29. More traces were detected in other test samples through January and February.” 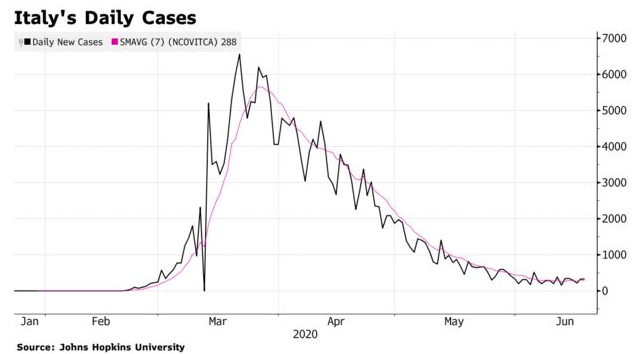 40 samples were tested and analyzes between October 2019 and February 2020 as part of the country's regular wastewater testing.

Hospital tests from other parts of Italy, like the coastal region of Liguria, also indicate the virus was present late last year. Italy's earliest "official" case was linked to a man who sought treatment in mid-February.

La Rosa says the study “may contribute to shedding light on the first phase of the virus’s circulation in Italy."

Stunningly, similar results were found in the waste water in Barcelona, which also showed traces of the virus in late 2019.

Meanwhile, China contends that there have only...

More in this category: « Market Snapshot: Dow gives up early gains as Apple says it will re-close stores and as W.H.O. says coronavirus has entered ‘new and dangerous phase’ The Wall Street Journal: Banks win right to liquidate millions in Luckin Coffee stock owned by chairman »