A slide that purports to be from Goodyear's diversity training has leaked and appears to show that the company considers “Blue Lives Matter,” “All Lives Matter” and “MAGA” attire “unacceptable,” while at the same time encouraging "Black Lives Matter" and "Lesbian, Gay, Bisexual, Transgender Pride (LGBT)" attire.

The differences are shown under a slide that appears to be outlining a zero tolerance policy. Aptly named, if we say so ourselves.

As The Gateway Pundit put it, the slide appears to be "zero tolerance" against support for police or conservative values. Which, of course, flies in the face of actually engaging in the values of tolerance and equality.

The employee who took the photo of the slide claimed that it was "presented at a Topeka plant by an area manager and says it came from their corporate office out of Akron, Ohio," according to a report from WIBW. 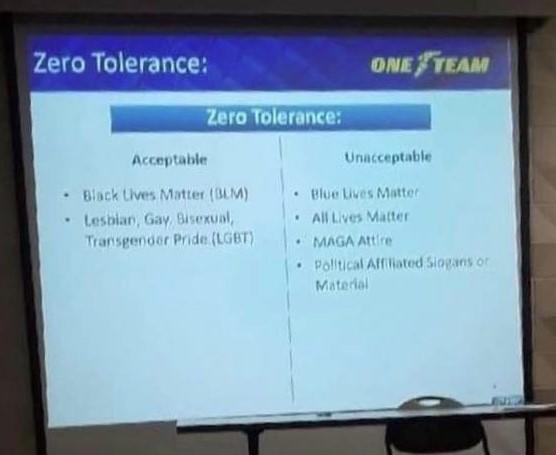 The employee told WIBW: “If someone wants to wear a BLM shirt in here, then cool. I’m not going to get offended about it. But at the same time, if someone’s not going to be able to wear something that is politically based, even in the farthest stretch of the imagination, that’s discriminatory.”

They continued: “If we’re talking about equality, then it needs to be equality. If not, it’s discrimination.”

Goodyear responded to WIBW, but dodged inquiries about whether or not the slide came from their corporate office. The company stated:

“Goodyear is committed to fostering an inclusive and respectful workplace where all of our associates can do their best in a spirit...

More in this category: « Market Extra: Why the dollar’s fall could turn into a rout if ‘political disarray’ continues Four reasons why the U.K. inflation jump won’t start a trend »