A CNN reporter described the mayhem in Kenosha as “mostly peaceful” even as cars set on fire by rioters burned behind him. 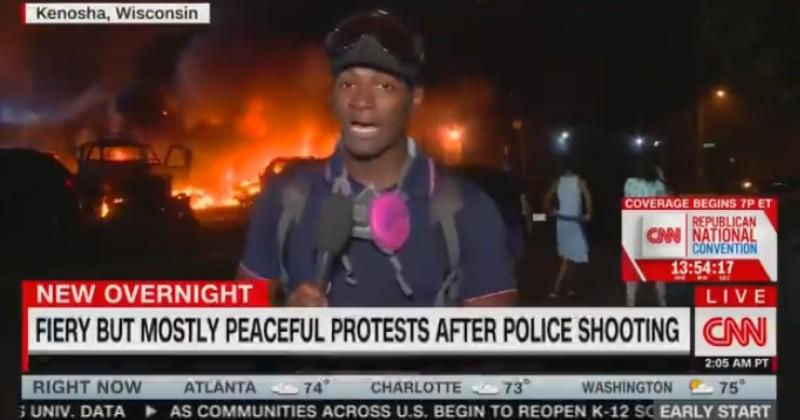 Omar Jimenez describes “multiple locations that have been burning in Kenosha, Wisconsin over the course of the night” before characterizing the unrest as “largely peaceful.”

The CNN chyron below Jimenez described the events as“fiery but mostly peaceful.”

Next time someone’s house is burning down, I’m sure the scene will be described as “fiery but mostly peaceful.”

Earlier this week, CBS News pulled a similar stunt when host Gayle King described “a second day of peaceful protests, which is what the Black Lives Matter is really about.”

In reality, there have been no “peaceful” protests in Kenosha. Every night has been a running battle between police and rioters.

Every night, car dealerships were set ablaze, stores were looted and people trying to protect their businesses were viciously assaulted.

A second day of peaceful protests gave way to clashes overnight in Wisconsin.
This comes after 29-year-old Jacob Blake was shot multiple times in the back by police as he tried to get into his car. He remains hospitalized in stable condition.@MolaReports has the latest. pic.twitter.com/4Ljb0hZFq0

In the age of mass Silicon Valley censorship It is crucial that we stay in touch. I need...

Read 339 times
Tweet
Published in Economics
More in this category: « The Ratings Game: Salesforce stock surges more than 25% for best day ever on ‘blow-out’ quarter Where Should I Retire?: We want upscale shopping and less extreme weather than New Jersey for $7,000 a month — where should we retire? »
back to top