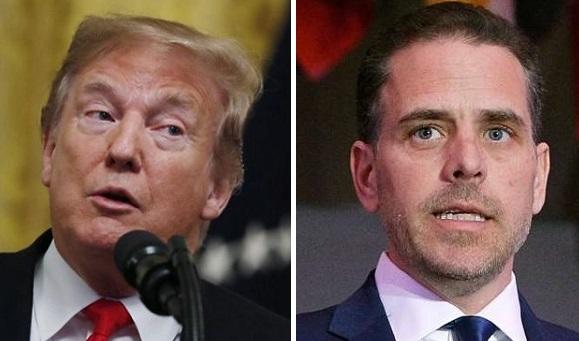 "This is major corruption and this has to be known about before the election," said Trump in an interview on "Fox & Friends." "We have got to get the attorney general to act. He’s got to act and he’s got to act fast, he's got to appoint somebody" the president added.

When asked how his campaign is going, he replied "It's just going very well," adding of Biden: "I think he’s imploding, you look at all that corruption in his family, tremendous corruption."

Hunter Biden dropped three MacBook computers off at a Delaware computer repair shop in April of 2019, signed a work order for 'data recovery,' and then never picked them up after the owner says he tried to contact the former Vice President's son. Contained within Hunter Biden's emails is evidence that Joe Biden was involved in leveraging his office in pay-for-play favors, including with Ukrainian energy giant Burisma - which thanked Hunter for the 'opportunity' to meet his father in 2015, before Joe forced Ukraine to fire their top prosecutor investigating the company.

Read 208 times
Tweet
Published in Economics
More in this category: « : Here’s what China’s economy grew to in the third quarter, as consumers find way back to stores In One Chart: Joe Biden just beat Donald Trump at his own game: Twitter »
back to top