Authored by Kevin Smith and Tavi Costa via Crescat Capital,

History does not exactly repeat, but it often rhymes. The art and science of macro investing is comparing past business cycles with the present across a mosaic of different indicators and time frames to determine the most probable path forward for markets. Throughout time, financial markets and the economy have been intimately linked to cycles of expansion and contraction of money and credit. The Federal Reserve was created by bankers and enacted by Congress in 1913 to provide a more flexible and stable monetary and financial system, but by no means did the Fed repeal the business cycle. In fact, the central bank has often played a role in amplifying booms and busts. For example, after introducing large-scale purchases of government securities to stem the recession of 1923, the Fed continued to expand the money supply and suppress interest rates through the remainder of the 1920s. Such monetary policy fanned the flames of historic stock market speculation which culminated in the stock market crash of 1929 to 1932 and the Great Depression. The macro set-up today is eerily similar as we will explain below. 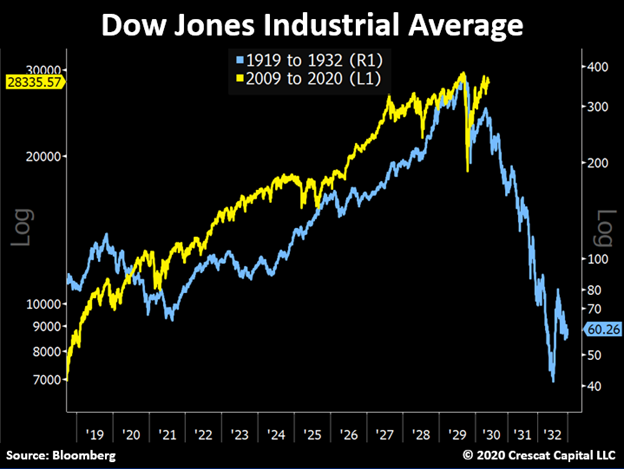 The Fed operates under the premise that it is making the financial system safer by attempting to stabilize the credit cycle, but since the Global Financial Crisis, monetary policy has served less like a temporary, elastic tool to smooth the business cycle and more like an addictive drug that requires a bigger and bigger dose to have the same effect while at the same time making its subject more imbalanced and prone to crash.

At Crescat, our composite of eight fundamental stock...

More in this category: « Metals Stocks: Gold settles lower as U.S. GDP expands at a record pace and investors favor the dollar Dispatches from a Pandemic: ‘It is now a full-blown depression for domestic workers.’ Nannies, house cleaners and home-care workers struggle as other job sectors bounce back »