The buying-panic is back (albeit briefly perhaps) as headlines from GameStop that it has created (and appointed) a new Chief Technology Officer role sent the embattled share price up 20%-plus. 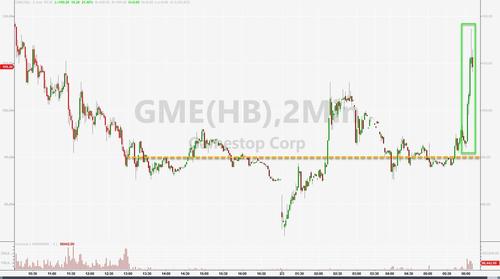 GameStop today announced that it has appointed Matt Francis to the newly-created role of Chief Technology Officer. Mr. Francis has a start date of February 15, 2021.

Mr. Francis brings more than two decades of experience in e-commerce and consumer technology to GameStop. Most recently, he was an Engineering Leader at Amazon Web Services. He previously held senior-level technology roles at companies such as QVC and Zulily. At GameStop, Mr. Francis will be responsible for overseeing e-commerce and technology functions.

Additionally, GME's pop could be related to news that online brokerage app Robinhood said on Wednesday it would allow buying of fractional shares in GameStop Corp and AMC Entertainment Holdings Inc.

However, what we find surprising to say the least is the fact that GME never had a CTO position previously?...

More in this category: « : A $15 minimum wage could cut government spending on welfare programs by up to $30 billion, study finds Cannabis Watch: Cannabis stocks rally anew as $7 billion GW Pharma deal spurs interest in weed and its medical benefits »