If you are unclear what’s happening, frankly, you aren’t paying attention. The central banks, at the urging of the World Economic Forum, have come from behind the shadows to assert their will over the world. 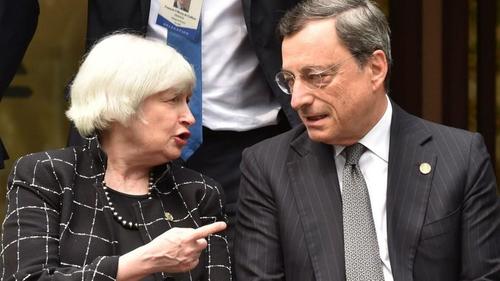 It doesn’t matter that Yellen was the architect of the worst recovery in history or that her incessant dithering on ending QE and raising rates. She’s a woman. Right?

The only good thing about Yellen at Treasury is that Steve “Mr. Goldman” Mnuchin is gone. All Mnuchin did at Treasury was ensure the outsourcing of monetary policy to Blackrock through the loan programs of the CARES Act and sanction anyone who didn’t pay Goldman enough Tribute.

So, from that perspective, I guess, Yellen is an upgrade. Because she’s just an incompetent career bureaucrat. But what this means is that since personnel is policy in D.C. the central banks will become the center of policy.

And that means full international coordination by them to implement not only MMT — Modern Monetary Theory — but also accelerate the adoption of digital-only versions of national currencies, CBDCs, to support the full takeover of the economy by central planners.

Given Biden’s first foreign policy speech last night and the very real smackdown issued by Russian President Vladimir Putin at this year’s Virtual Davos, expect nothing but more of what ailed us under Trump taken up another notch.

Putin’s speech was one for the ages, to be honest, and everyone should read it.

More in this category: « CityWatch: How soon will New York vaccinate its prisoners? In One Chart: Home prices surged 20% in October from a year prior, but Goldman says gains are not yet over »