10-year yields broke through 1.25% during the overnight session on what can best be described as pressing a crowded trade. We’re certainly onboard with a challenge of 1.25% and 1.273% (March 19th peak) beyond there, if for no other reason than late-Friday’s selloff has created more questions than answers – suggesting the underlying momentum evident during the overnight session must run its course before any retracement is in the offing. 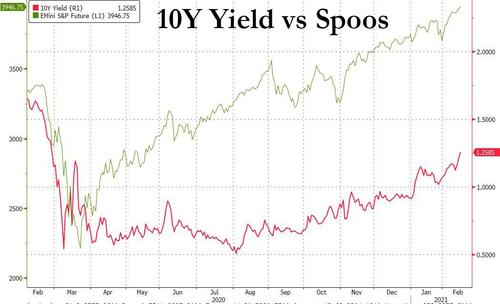 Moreover, the lack of an immediate bearish trigger also implies the recent bout of weakness has taken on a different character than had the march toward higher yields been accompanied by a fundamental data event or an influx of Treasury supply. In fact, the relatively smooth takedown of the February refunding left investors with the impression the supply concession in place prior to the auctions themselves would be sufficient. It’s the reemergence of the bearish trend in the absence of an identifiable catalyst that makes the selloff particularly notable.

Given the fact rates are edging higher on a combination of bearish underpinnings as opposed to a distinct driver, the technical landscape is useful in gauging the extent to which any repricing may extend. Beyond 1.273%, there is little support for 10s until an opening gap from 1.431%-1.471% that was established in late-February. 1.50% also holds obvious significance, however a 25 bp selloff driven by a series of already known bearish factors is difficult to envision, leaving us to anticipate dip-buying will emerge long before the overhead opening gap with an eye on anything >1.30% as sufficient incentive for any demand not sated by last week’s auction of $41 bn 10s at 1.155%.