The Internet Party One citizen... one vote... zero government interference.
updated 10:48 PM, Jul 6, 2022 UTC
Headlines:
Huge rent price spikes may be coming to an end: Data: Zumper; Chart: Axios Visuals Rent prices have soared over the last year, b
Study: Most reporters don't believe in 'equal' cover: When it comes to equal treatment of all sides in the news, the public expects far
: Target expands promotions for students and teacher: Target back-to-school plans include deeper discounts, which could be a welcome per
Norway-Russia Tensions Escalate Over Sanctions Impac: Norway-Russia Tensions Escalate Over Sanctions Impacting Arctic Islands Authored
Kamala Harris ‘seriously’ roasted for repetitive: Vice President Kamala Harris was “seriously” skewered online for a repetitive,
Court won't block Mississippi's abortion trigger ban: A judge in Mississippi on Tuesday denied a request from the providers asking to te
AccuWeather Expects $50 Billion In Economic Damage After Winter Storms Pound US

AccuWeather Founder and CEO Dr. Joel N. Myers said the latest batch of major winter storms had wreaked havoc in Texas and across the country. He estimates total damage and economic loss could amount to $45 and $50 billion. This comes as the US economy is on life support through fiscal and monetary injections.

For some perspective, AccuWeather estimates the 2020 hurricane season, one of the most active on record, cost between $60-$65 billion.

"We have been experiencing one of the stormiest patterns seen in decades," said Myers. Ahead of the mayhem, readers may recall we warned about an "Overwhelming Signal" - Major Winter Storm Threats For Million Of Americans Within Next Five Days."

Myers has been studying severe weather for more than five decades. He said, "the damage has been exacerbated by the record cold temperatures that have pushed to the Gulf Coast this week." Myers also warned the crisis's impact would ripple through the already fragile recovery. 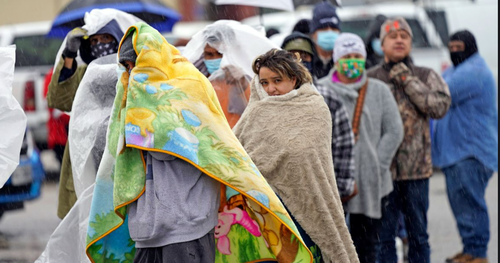 More in this category: « : Facebook, Twitter, Bank of America and other large companies pledge to boost numbers of diverse leaders Market Snapshot: U.S. stock-market investors are already betting on an infrastructure spending spree »