We noted yesterday that with the NASDAQ red for the year, all eyes were going to be on ARKK's high flying "Innovation ETF", which plunged 5.3% on Thursday amidst a broader NASDAQ selloff. 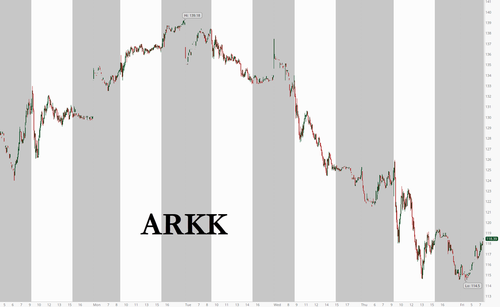 Despite the fact that, for the moment at least, NASDAQ futures are slightly higher heading into the cash open, Cathie Wood's ARKK ETF is still red, and has been down between 0.1% to 1.5% ahead of the opening bell on Friday.

With yesterday's plunge, most of ARKK's recent inflows appear to be underwater...

$ARKK inflows really started to accelerate from 12/1. The VWAP from that date is 137.50. The majority of volume now significantly underwater pic.twitter.com/bVP9itqCCY

And according to recent flow data, its funds saw about $628 million across five ETFs in outflows yesterday...

And as ARK's trade updates yesterday seem to disclose, Wood's strategy doesn't appear to be changing. As we have been pointing out, that strategy appears to be selling large, liquid big cap names and rotating the cash into smaller, speculative, small cap names.

Cathie Wood is legit selling all her liquid positions and doubling down.
Wow. https://t.co/GuOQhHqG8U

ETF expert Eric Balchunas called it "nerves of steel". That's one name for it.

More in this category: « The Fed: Powell says current policy appropriate even as bond market turmoil has caught his eye : Britain and the EU plunged into new crisis over food imports to Northern Ireland »