Update (1011ET): Colonial Pipeline reopened a section of its paralyzed pipeline system after a ransomware attack, reconnecting some East Coast markets with a critical supply hub, according to Bloomberg.

The section of line in the oil-refining part of South Texas that runs to North Carolina remains shuttered. Across the Southeast, fuel shortages have materialized at gas stations.

In a bid to alleviate some of the shortage, the Environmental Protection Agency issued an emergency fuel waiver on Tuesday for refiners to reformulate gasoline in the Mid-Atlantic area. The waiver extends through May 18 for fuel sold in Virginia, Washington, D.C., Maryland, and Pennsylvania.

Update (0647ET): And just like that, the Southeast of the US is heading down a dark path similar to one of the 1970s gas shortages from Virginia to Florida to Alabama following the Colonial Pipeline ransomware attack. Even with Colonial set to restore systems by the weekend, shortages have already materialized as people panic hoard.

The real panic has yet to begin as millions of Americans are waking up for work, hopping into their vehicle across the Southeast, and are hearing fuel shortages on the radio or reading push notifications on their phone. Driving down the street, they see rising fuel prices, signs at pumps that either read shortage or pump restrictions, or even see some gas stations closed. 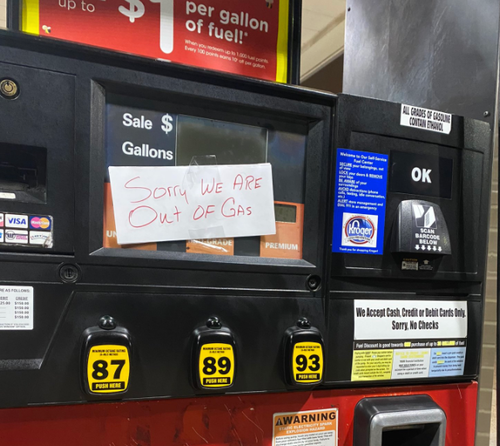 One Twitter user reports one gas station is placing "limits" on fuel...