The Internet Party One citizen... one vote... zero government interference.
updated 10:50 PM, Jul 5, 2022 UTC
Headlines:
Court won't block Mississippi's abortion trigger ban: A judge in Mississippi on Tuesday denied a request from the providers asking to te
Majority of adults say Washington under Biden hurts : People are losing faith in Washington's ability to tackle their top concerns four
Rising Interest Rates May Blow Up The Federal Budget: Rising Interest Rates May Blow Up The Federal Budget By Jeff Diest of The Mises I
Robert Crimo’s dad liked Second Amendment tweet on: Robert Crimo, the deli owner dad of Robert "Bobby" Crimo III, 22, the person of in
What we know about Highland Park July 4th parade mas: At least six people were killed and two dozen others hospitalized in a mass shooti
Democratic AGs, Soros-backed prosecutors vow to defy: Some of the same Soros-funded prosecutors accused of going easy on criminals are n
Existing Home Sales Unexpectedly Tumbled In April For 3rd Straight Month As Prices Soar

After March's mixed signals from the housing market (Pending and Existing sales down, New Home sales up), the first glimpse of April comes today with Existing home sales expected to rise modestly (+1.0%) from the 3.7% drop in March (and 6.3% drop in Feb). However, April Existing Home Sales unexpectedly tumbled for the third straight month (down 2.7% MoM), dramatically missing expectations. 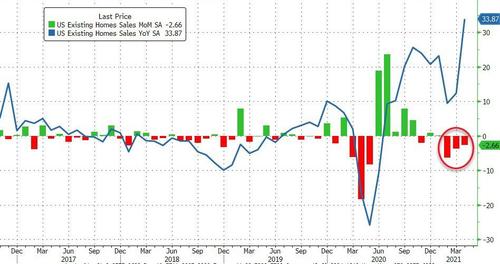 Obviously the YoY figure of +33.87% is just noise from the COVID collapse lows. 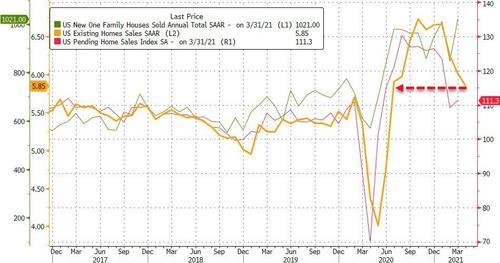 Price was the issue as it soared to a new record high... 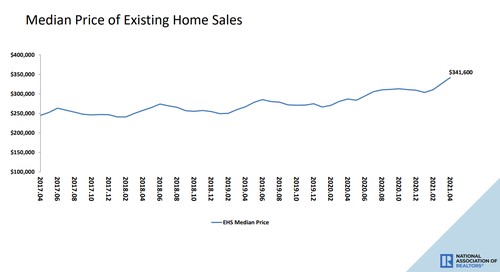 But sales of homes over $1 million soared... 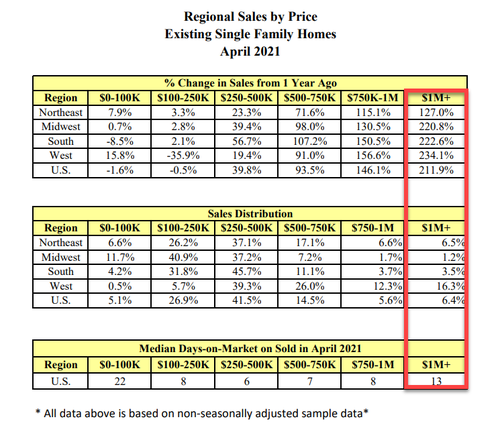 The sales decline in April “is due to the lack of homes on the market,” Lawrence Yun, NAR’s chief economist, said on a call with reporters.

“Even with home sales declining modestly, one can describe the market as being hot.”

There were 1.16 million homes for sale at the end of last month, down 20.5% from a year earlier. It would take 2.4 months at the current pace to sell all the homes on the market. A year ago, it was 4 months. Realtors see anything below five months of supply as a sign of a tight market.

Three of four regions posted sales declines in April, led by a 3.9% decrease in the Northeast and a 3.7% drop in South. Contract closings fell 3.1% in the West and increased 0.8% in the Midwest

And, as we have noted recently, the enthusiasm of homebuilders (near record highs) is mirrored almost...

More in this category: « : Here’s what you need to know about buying travel insurance during a pandemic : Ending enhanced unemployment benefits alone won’t get people back to work, SF Fed research suggests »