The G7 group of advanced economies reached a landmark deal Saturday to end the race to the bottom on taxes.

Finance ministers - from US, UK, France, Germany, Canada, Italy, and Japan - met in London Saturday and agreed to a minimum global corporation tax rate of at least 15%, and also had put in mechanisms within the deal to ensure multinational companies operating in other countries were paying their fair share of taxes.

Around 0800 ET, the US Treasury Department said G7 finance ministers and US Treasury Secretary Janet Yellen released a statement on agreements around building more robust, sustainable, balanced, and inclusive global economic recovery. The statement outlines agreements on global economic recovery, transformative efforts to tackle climate change and biodiversity loss, continued support to low-income and vulnerable countries, and shaping a successful recovery for all. 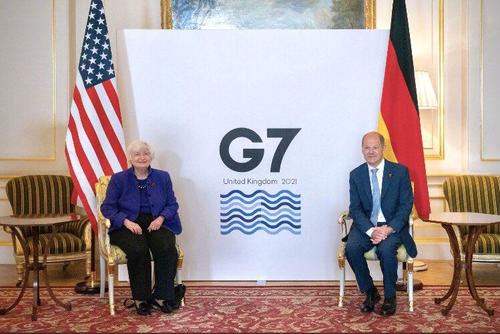 Yellen also took to Twitter, who said, "G7 Finance Ministers have made a significant, unprecedented commitment today that provides tremendous momentum towards achieving a robust global minimum tax at a rate of at least 15%."

She said the "global minimum tax would end the race-to-the-bottom in corporate taxation, and ensure fairness for the middle class and working people in the U.S. and around the world." Adding that, "global minimum tax would also help the global economy thrive, by leveling the playing field for businesses and encouraging countries to compete on positive bases, such as educating and training our work forces and investing in research and development and infrastructure."

The global minimum tax could seriously limit the ability of corporations (particularly American tech giants) to save money by moving to low-tax jurisdictions. It follows President Biden's plans for the most significant...

More in this category: « The Ratings Game: AMC stock is ‘out of touch’ with fundamentals but capital raises should provide a boost, analyst says The Big Move: I live in Seattle, but it’s overrun with tech workers. Where can I move that has cheap homes — and fast internet speeds? »