Authored by Mike Shedlock via MishTalk.com,

Who's right? The Bond market or the massive herd screaming inflation? 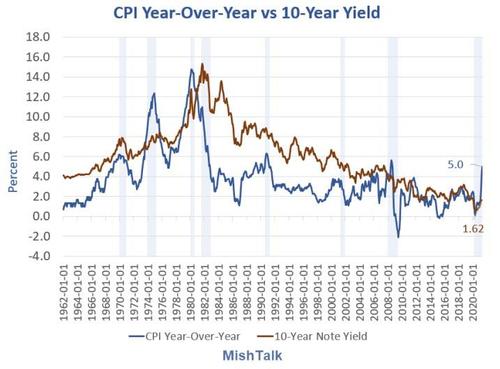 The 10-year yield has since fallen to 1.46% causing alarm bells in some quarters.

His reasoning: Inflation as a temporary phenomenon caused by enormous pent-up demand and supply chain issues connected to the coronavirus pandemic.

“The numbers have been shocking to the upside, no doubt about it. But it’s pretty easily explainable,” the Rosenberg Research president told CNBC’s “Trading Nation” on Friday. “I don’t understand why people want to superimpose these last couple of months into the future.”

So far, the bond market is shrugging off inflation. The benchmark 10-year Treasury Note yield hit its lowest level since March 3 on Friday and closed at 1.45%. The yield is off 7% over the last week and down almost 11% over the past month.

“There is just so much noise and distortion in the data,” said Rosenberg, who served as Merrill Lynch’s top North American economist from 2002 to 2009. “The most dangerous thing anybody can do is extrapolate what’s happening now.”

Rosenberg  says he “refuses to hyperventilate over inflation” and that surging growth will fade in the second half of the year.

Read 160 times
Tweet
Published in Economics
More in this category: « Market Snapshot: Here’s what the market wants — and doesn’t want — to hear from Powell at this week’s Fed meeting Coronavirus Update: U.K. expected to delay reopening as Delta variant accounts for 90% of cases and U.S. court upholds mandatory vaccination »
back to top