Ten days ago, NASA's satellite spotted a massive dust storm blowing off the Sahara Desert and into the waters of the Atlantic Basin. At the time, we forecasted dust clouds were "headed for the Americas."

Fast forward today, millions of tons of Sahara's nutrient-laden minerals have been whisked across the Atlantic Ocean and are set to arrive in South Florida on Friday or Saturday.

#SaharanDust has been on the move across the Atlantic for the past few weeks. So far, no clouds thick enough to make it to Texas before dissipating - and none on the horizon. #TXwx #OrangeHaze pic.twitter.com/JmxrvUo5N6

What to expect in South Florida? 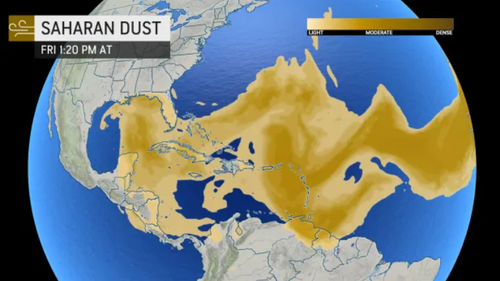 This latest storm comes one year after the largest dust storm in two decades blanketed the Caribbean and even dimmed skies over US Gulf states.