After a mixed picture in Manufacturing surveys in June (PMI marginally higher, ISM marginally lower), and serially down-trending 'hard' data, this morning's Services surveys show a serious and coordinated disappointment as ISM Servceis tumbled from 64.0 to 60.1 and Markit's PMI dropped from 70.4 to 64.6... 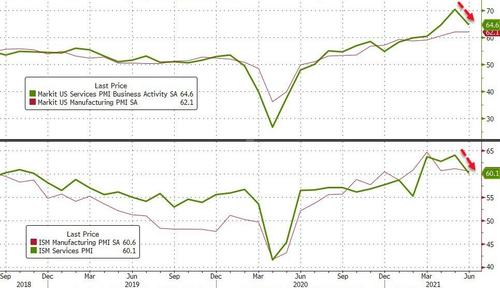 Is it time to catch down to reality? 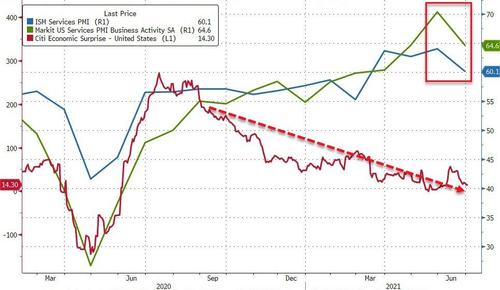 The IHS Markit U.S. Composite PMI Output Index posted 63.7 in June, down from May's recent high of 68.7. The overall upturn eased following slower output expansions across both the manufacturing and service sectors. Nonetheless, the rate of growth in activity was substantial and the second-fastest on record. 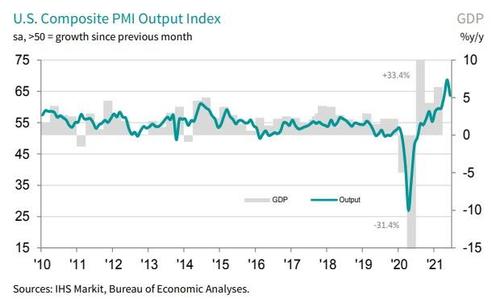 Contributing to the softer upturn in output was a slight moderation in the rate of new business growth during June.

At the same time, cost pressures remained marked in June. Further raw material shortages and hikes in supplier and fuel costs reportedly pushed input prices higher, according to panellists. The rate of cost inflation was the second-quickest on record. Firms passed on greater costs to clients via the secondsharpest increase in average selling prices for goods and services since data collection began in 2009.

“June saw another month of impressive output growth across the manufacturing and services sectors of the US economy, rounding off the strongest quarterly expansion since data were first available in 2009.

“The rate of growth cooled compared to May’s record high, however, adding to signs that the economy’s recovery bounce peaked in the second quarter....