President Joe Biden waved off long-term inflation concerns on Wednesday, telling a CNN town hall in Cincinnati that it won't persist as the economy emerges from the pandemic. 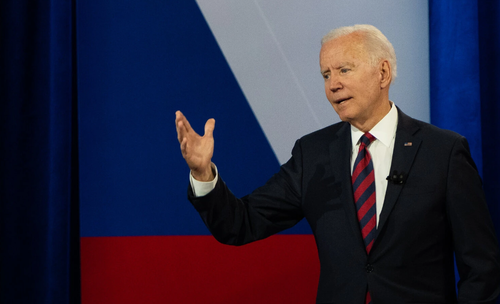 "There will be near-term inflation" because the economy is recovering, he said, adding that 'most economists' think "it’s highly unlikely that it’s going to be long-term inflation that’s going to get out of hand."

He then cautioned restaurant owners and others in the hospitality sector that recovery may not be swift - telling one restaurant owner that he may be "in a bind for a while" because workers are seeking better wages and working conditions, according to Bloomberg.

"It really is a matter of people deciding now that they have opportunities to do other things," he said, adding "People are looking to make more money and to bargain."

Inflation has become a political liability for the White House in recent weeks. The U.S. experienced the largest surge in consumer prices in more than 12 years last month, with a Labor Department gauge rising 5.4% compared to one year ago.

“Inflation is driving the cost of everything through the roof,” Senate Minority Leader Mitch McConnell of Kentucky said at a news conference Wednesday opposing Democratic calls for Biden’s long-term social spending plan. -Bloomberg

Republicans, meanwhile, largely blame Biden and Democrats for the labor shortages at restaurants and other low-wage businesses because overly-generous pandemic stimulus has removed incentives...

More in this category: « International Living: Panama or Portugal – Which expat favorite is right for your retirement? Therese Poletti's Tech Tales: This is your final warning — Chinese stocks listed in the U.S. are dangerous to hold »