Amidst a historic labor shortage and government stimulus at all time highs, workers heading into their 60s have had enough, according to new data released by the New York Federal Reserve.

Respondents to a survey asking whether or not they would want to work past the age of 62 were down to 50.1% in the survey from 51.9% the year prior, a Bloomberg report notes.

It marks the lowest number on record for a survey that has been conducted for the last 7 years. 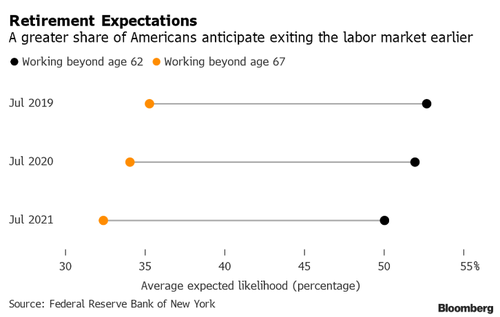 In addition to showing a shifting ethos about working into your senior years, the data also reflects a "wave of early retirements" that were triggered by the pandemic, the report says, noting that more than 1  million older workers have left the labor market since March 2020. We covered some of those early retirements, specifically amongst EMTs, last year. 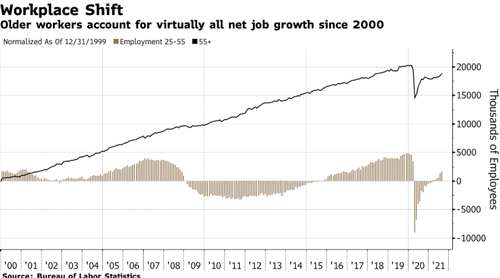 Some workers have re-thought their future because they have "bigger nest eggs" thanks to "exuberant financial markets", the Bloomberg report notes. Yeah, especially Robert Kaplan.

Since job growth had come from older workers over the last two decades, the shift in attitude has also caused a "dramatic" shift in the labor market.

Bloomberg notes that workers already in the labor force are holding on tighter to the jobs they already have. The salary necessary to get workers to consider leaving their current job has risen "sharply" for workers over 45 years old to 11%. 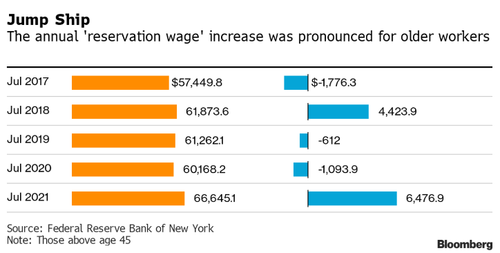 We're sure inflation and a skyrocketing cost of living has nothing to do with this......

More in this category: « Outside the Box: Who’s afraid of the Bogleheads? NewsWatch: Companies are now issuing more stock than they did at top of the internet bubble and here’s why that matters »