"We may still see gas prices a bit high for the next days and weeks to come," Birol said in the interview. The "most important factor here will be in the short term -- how the winter conditions will be."

He said if the European winter season is "harsh." This would suggest natgas prices may remain elevated and or even accelerate higher. So far, European gas prices have more than tripled this year.

Birol said, "very strong demand" due to the economic rebound has been a driver in higher natgas prices. There's also the issue of declining flows from Russia, which have failed to replenish European stockpiles ahead of the heating season. 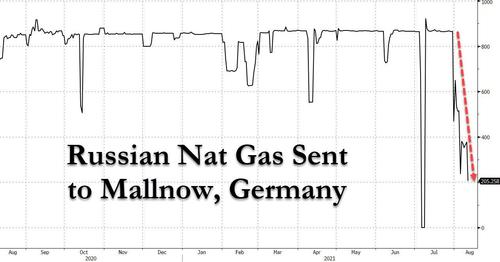 Natural gas supplies are below average for this time of year.

For Central Europe, maximum average temperatures have already slipped from around 80F in mid-August to about 70F. By the end of the month, maximum high temps are slated to drop between the 55F to 60F range. This means the heating season is beginning.

Another way to quantify increasing heating demand in Central Europe is through heating degree days, which measure the energy needed to heat a building. The index rises when daily average temperatures are below 65F.

Uncertainty looms over the replenishment of European natgas supplies as colder weather has arrived. Russia's Nord Stream 2 pipeline to Germany could be Europe's saving grace, but regulators could...