Last week, British Army personnel were on standby as service station pumps ran dry across the country, forcing vendors to ration sales as a shortage of truck drivers strained supply chains of major oil and gas suppliers. AFP reports Monday that as many as 200 military tanker personnel have been deployed to alleviate the energy crisis. 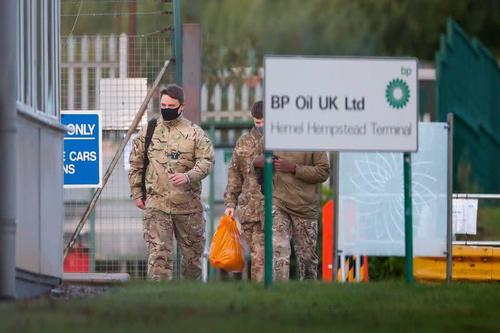 "More than half of those who have completed training to make fuel deliveries are being deployed to terminals serving London and the south east of England, demonstrating that the sector is allocating drivers to areas most affected in this first phase from Monday," a UK government spokesperson said.

"While the situation is stabilizing, our Armed Forces are there to fill in any critical vacancies and help keep the country on the move by supporting the industry to deliver fuel to forecourts," Wallace said.

The Petrol Retailers Association (PRA), representing 65% of the country's independent service stations, welcomed the news of military supporting efforts to resupply service stations but warned the soldiers were likely to have minimal effect.

PRA chairman Brian Madderson said 20% of the fueling stations in London and southeast England were out of fuel, and the rest of the country had adequate supply.

For two weeks, long queues of motorists at gas stations extended into city streets as people panic hoarded fuel due to the uncertainties of shortages.

Ahead of calling in the military, Prime Minister Boris Johnson relaxed curbs on...