While it is of secondary importance to US readers, in the UK everyone was glued to the telly following today's Autumn Budget and Spending Review, and the budget speech in Parliament by Chancellor of the Exchequer Rishi Sunak. For the benefit of our British readers, and for gilt traders everywhere, here is a snapshot of what was just announced courtesy of Bloomberg: 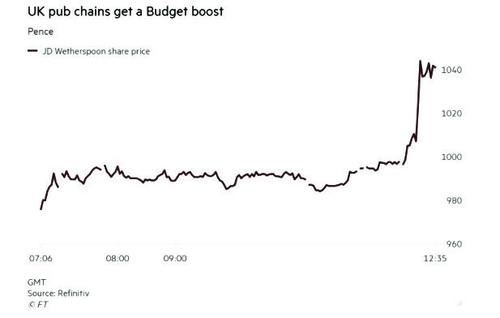 Pivoting from his spending announcements, Sunak made a philosophical statement that “government should have limits — it needed saying”. He added: “I want to reduce taxes — by the end of this parliament I want taxes to be going down not up . . . that’s my mission over the remainder of the parliament.”

More in this category: « The Moneyist: My mother is giving away my late grandmother’s jewelry. Is it OK to accept a piece from her collection — and then sell it? : Firearm sales are soaring. Will the Alec Baldwin shooting prompt new discussion about gun safety and usage? »