At this point, one can't say the G-20 meeting in Rome was entirely unproductive, although the unofficial run-up to the upcoming COP climate conference in Glasgow next week didn't seem to accomplish much.

After the US and EU trade negotiators struck a deal late yesterday to resolve a trade spat dating back years, the G-20 nations - an agglomeration of the most economically powerful nations on the planet - have agreed early Sunday on a new climate framework that they will bring to the climate accords in Glasgow next week (although Russia and China, two prominent G-20 members, skipped the international circle-jerk, and with good reason). Both leaders participated in the Rome meetings via video conference, and aren't expected to join in person in Glasgow. 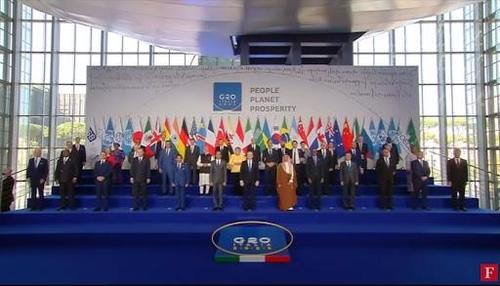 Anyway, on Sunday, negotiators from all sides reached agreement on the climate section of the G-20 summit’s final conclusions, giving the world's biggest and most developed countries something to take with them to the COP26 summit in Glasgow this week. Of course, as we have explained, developing nations will need some seriously convincving, since projections show them having the most to lose over the coming decades as they catch up to their developed peers.

According to Bloomberg, the G-20 deal - as expected - calls for a reduction in offshore coal plants, while recommitting the global community to the aims first adopted 6 years during the Paris Accords (which haven't hardly come close to being realized).

Negotiators reached agreement on the climate section of the Group of 20 summit’s final conclusions, giving leaders something to take onto the COP26 summit in Glasgow this week.

The language largely mirrors prior pledges made...