Turkish lira shorts - such as this website - knew that making money by betting on the implosion of Erdogan's authoritarian caliphate was just a matter of time. They just didn't know the implosion would take place this quick, because after tumbling for 10 straight day, the currency’s 11-day losing streak - which is the longest in 20 years - saw Erdocoin (f/k/a lira) collapse almost 20% IN ONE DAY - crashing all the way to 13.4539 after opening at 11.3853... 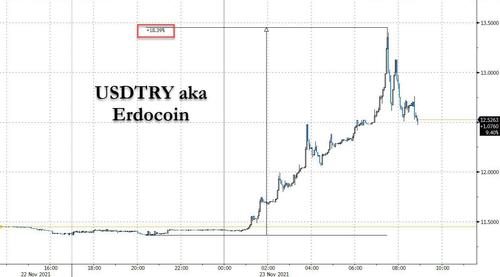 ... hitting a fresh all-time low and bringing the currency's YTD losses to over 40%, blowing out the Argentine peso in the process. 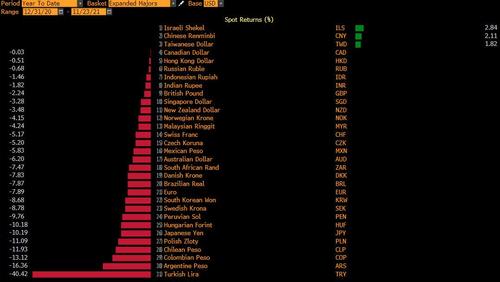 The collapse, which has been going on for the past 4 years really, accelerated yesterday after Erdogan used a televised speech late Monday to defend his support for lower interest rates to boost economic growth and job creation (see "Erdogan Tells Lira To Drop Dead As Currency Collapse Threatens Financial System, Bank Runs, Hyperinflation").

The selloff then really kicked into high gear when Erdogan’s government ally and MHP leader Devlet Bahceli spoke at party’s parliamentary group meeting in Ankara, said that Central bank independence should be debated and “independent institutions cannot be above the will of the nation" hinting that the Turkish Central Bank is likely about to be nationalized formally as opposed to just informally.

Bahceli said that he supports the government’s policy on the economy, saying “Turkey should be free of interest rate burden” adding - to the horror of any remaining lira longs - that "tight monetary policy would hurt economy” more than the impact of lower rates and lira weakness. Meanwhile, the Turkish central...