Shares of Tesla plunged under the key $1000 level this morning after Reuters reported that the company was being probed by the Securities and Exchange commission over claims about defects on its solar panels made by a former-employee-turned whistleblower. 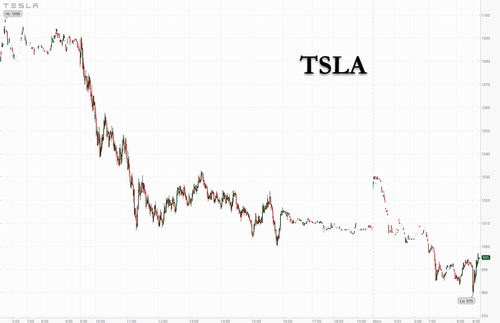 In describing the allegations made by the whistleblower, Reuters wrote that "...the company failed to properly notify its shareholders and the public of fire risks associated with solar panel system defects over several years."

The SEC disclosed the probe after "a Freedom of Information Act request by Steven Henkes, a former Tesla field quality manager, who filed a whistleblower complaint on the solar systems in 2019 and asked the agency for information about the report," Bloomberg wrote early Monday morning.

"We have confirmed with Division of Enforcement staff that the investigation from which you seek records is still active and ongoing," the SEC reportedly said in their response to Henkes.

Henkes was "fired from Tesla in August 2020 and he sued Tesla claiming the dismissal was in retaliation for raising safety concerns," the report says.

Henkes, in the SEC complaint, said he told Tesla management that Tesla needs to shut down the fire-prone solar systems, report to safety regulators and notify consumers. When his calls were ignored, he proceeded to file complaints with regulators.

The probe could come at the worst possible time for Tesla super-fan Cathie Wood, who we noted last week was watching her "flagship" fund seriously underperform market indexes despite the fact that Tesla was up almost 100% over the last 12 months.

More in this category: « Retirement Weekly: The best reason of all to postpone retirement : New York becomes the first major city to require kids to show proof of vaccination for indoor activities »