This year, China's troubled ride-hailing giant Didi has had a clouded outlook as Chinese regulators crackdown on its consumer data, leading to an upcoming delisting from US exchanges. The company plans to list in Hong Kong next year, but today's new filing revealed a $4.7 billion loss in the third quarter.

Didi has been one of the highest-profile targets of a regulatory crackdown by Beijing to rein in the country's giant tech sector. It reported Thursday $6.6 billion of sales, plunging 13% from the June quarter and 1.6% from a year earlier, according to the company's unaudited third-quarter results.

The surprise revelation sent shares tumbling premarket in New York, down more than 8%.

Troubles for Didi began days after its late June IPO in New York. Chinese regulators surprised investors by launching cybersecurity investigations into the company concerning consumer data. Didi was then removed from app stores in China and has crashed 65% since the IPO.

China has also proposed a new law making it harder for companies to list overseas. A listing would be blocked if considered a national security threat.

Beijing forced Didi to delist from New York and relist in Hong Kong. The unprecedented move highlighted the depth at which Beijing will go to protect sensitive data amid soaring geopolitical tensions with the US.

The regulatory turmoil has been nothing but a mess for Chinese tech stocks. The Nasdaq Golden Dragon China Index has been more than halved this year because of the unpredictability generated by the crackdown. 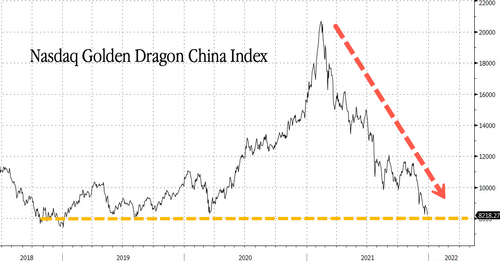 We should point out that after a years-long regulatory crackdown, Beijing is taking a new stance to stabilize the economy through...

Read 152 times
Tweet
Published in Economics
More in this category: « In One Chart: The 10 most expensive climate-change disasters of 2021 cost $170 billion — and this U.S. storm was No. 1 The Conversation: The ‘Great Resignation’: Heed these 8 tips from an employment lawyer before you quit »
back to top