The Internet Party One citizen... one vote... zero government interference.
updated 10:48 PM, Jul 6, 2022 UTC
Headlines:
Huge rent price spikes may be coming to an end: Data: Zumper; Chart: Axios Visuals Rent prices have soared over the last year, b
Study: Most reporters don't believe in 'equal' cover: When it comes to equal treatment of all sides in the news, the public expects far
: Target expands promotions for students and teacher: Target back-to-school plans include deeper discounts, which could be a welcome per
Norway-Russia Tensions Escalate Over Sanctions Impac: Norway-Russia Tensions Escalate Over Sanctions Impacting Arctic Islands Authored
Kamala Harris ‘seriously’ roasted for repetitive: Vice President Kamala Harris was “seriously” skewered online for a repetitive,
Court won't block Mississippi's abortion trigger ban: A judge in Mississippi on Tuesday denied a request from the providers asking to te
"A Recurring Fountain Of Revenue": FDA Exec Admits Biden Planning Annual Shots, Including Toddlers

Food and Drug Administration (FDA) Executive Officer Christopher Cole was caught on undercover camera by Project Veritas, where he revealed that his agency plans to announce that annual Covid-19 vaccinations will become official policy. 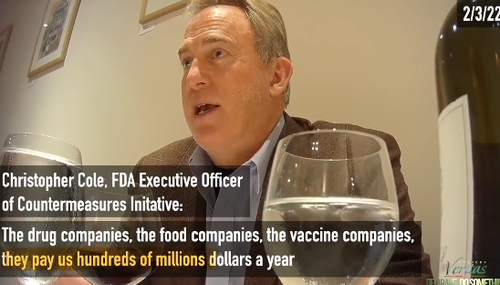 As Project Veritas reports (emphasis ours):

Cole is an Executive Officer heading up the agency’s Countermeasures Initiatives, which plays a critical role in ensuring that drugs, vaccines, and other measures to counter infectious diseases and viruses are safe. He made the revelations on a hidden camera to an undercover Project Veritas reporter.

Cole indicates that annual COVID-19 shots isn’t probable -- but certain. When pushed on how he knows an annual shot will become policy, Cole states, “Just from everything I’ve heard, they [FDA] are not going to not approve it.”

Stop what you’re doing & watch this right now.
“The drug companies, the food companies, they pay us millions of dollars a year”#ExposeFDA https://t.co/eyYmBlEfOj

The footage, which is part one of a two-part series on the FDA, also contains soundbites from Cole about the financial incentives pharmaceutical companies like Pfizer have to get the vaccine approved for annual usage.

“It’ll be recurring fountain of revenue,” Cole said in the hidden camera footage. “It might not be that much initially, but it’ll recurring -- if they can -- if they can get every person required at an annual vaccine, that is a recurring return of money going into their company.”

Perhaps the most explosive part of the...

More in this category: « : Over 112 million people watched the Super Bowl — up 14% from last year The Moneyist: ‘He walked out on our marriage 2 years ago and disappeared’: How do I serve my missing husband with divorce papers? He owes me thousands of dollars »