The Internet Party One citizen... one vote... zero government interference.
updated 10:48 PM, Jul 6, 2022 UTC
Headlines:
Huge rent price spikes may be coming to an end: Data: Zumper; Chart: Axios Visuals Rent prices have soared over the last year, b
Study: Most reporters don't believe in 'equal' cover: When it comes to equal treatment of all sides in the news, the public expects far
: Target expands promotions for students and teacher: Target back-to-school plans include deeper discounts, which could be a welcome per
Norway-Russia Tensions Escalate Over Sanctions Impac: Norway-Russia Tensions Escalate Over Sanctions Impacting Arctic Islands Authored
Kamala Harris ‘seriously’ roasted for repetitive: Vice President Kamala Harris was “seriously” skewered online for a repetitive,
Court won't block Mississippi's abortion trigger ban: A judge in Mississippi on Tuesday denied a request from the providers asking to te
Futures Tumble After Deadly Escalation In Ukraine Crisis

Any hope of de-escalation following the news late last night that Putin and Biden had agreed to a Macron-organized summit to pursue a diplomatic path out of the Ukraine crisis lasted only a few hours, and died a painful death around 3am Eastern time, after Kremlin spokesman Dmitry Peskov poured cold water on the summit progress when he said that  "It's premature to talk about any specific plans for organizing any kind of summits" and that there are no "concrete plans" for a summit yet. Subsequent news that a mortar shell had destroyed a Russian border checkpoint near Rostov - something which Ukraine's military denied doing - did not lift the already downbeat mood, but it was the news just after 7:40am ET that Russia had killed five "saboteurs" who tried to violate its border (and which Ukraine once again slammed as fake news) in an unconfirmed incident that would be the first direct clash with Ukrainian forces, that sent US equity futures tumbling 0.92% to session lows of 4,299.5, down some 90 points from overnight highs, and hit global risk assets while safe havens such as gold and the dollar spiked. The 1.5% decline in Nasdaq 100 futures outpaced that of S&P 500. 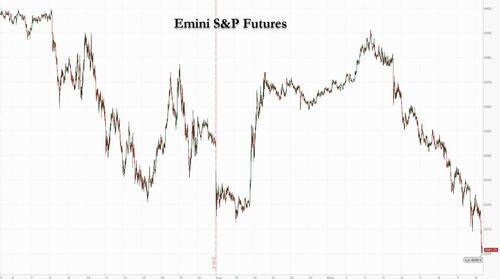 While US markets are closed for the President's Day holiday, equity futures are trading and have been following the news out of Ukraine tick for tick, as have European bourses, with the Euro Stoxx 600 index falling as much as 1.9%, to the lowest since Oct. 6 as investors digest latest developments around Ukraine tensions.

And while US cash treasuries are also closed, Treasury futures are open and at last check were implying...