The poor are suffering most from inflation, even though their wages have risen by the largest percentage... as the 'money illusion' takes hold across America...

Money illusion is an economic theory positing that people have a tendency to view their wealth and income in nominal dollar terms, rather than in real terms.

In other words, it is assumed that people do not take into account the level of inflation in an economy, wrongly believing that a dollar is worth the same as it was the prior year.

As WaPo reports, here’s the money chart (so to speak), with calculations by Penn Wharton Budget Model.

It shows inflation-driven increases in spending vs. increases in annual earnings for households at different income levels: 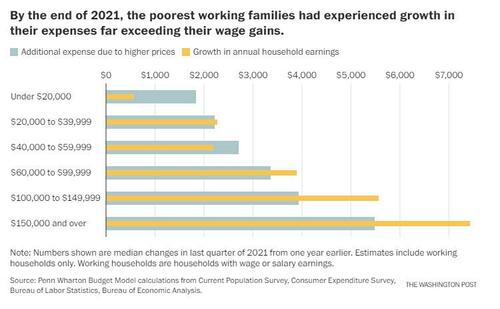 By the end of 2021, the poorest working families had experienced growth in their expenses far exceeding their wage gains; the reverse was true for the highest-income households.

Early in the pandemic, many commentators lamented the two-track, or K-shaped, recession: one where the rich were doing fine while the poor foundered. This past year, as labor shortages helped low-wage workers negotiate for larger raises, it looked like those at the bottom were finally seeing their relative fortunes rise.

But inflation has robbed many of the poorest households of even these victories. So the same old trends continue: The rich get richer, while the poor struggle to get by.

In the brief video below, Professor Scott Galloway walks readers through the reasons for this regressive tax on the poor...