A violent group of pro-abortion protesters in Los Angeles threw rocks at police and smashed squad car windows, injuring one police officer in the process. 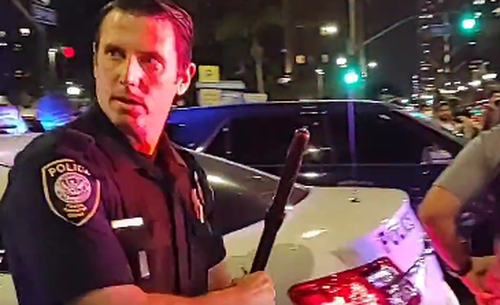 The protest took place in the Pershing Square area following the leaked US Supreme Court draft opinion which would overturn Roe v. Wade, the 1973 landmark decision that guarantees the right to abortion at the federal level.

Receiving update on protest @ Pershing Square. A segment of the group began to take the intersection. We attempted to communicate, clear and provide dispersal order to the group. Crowd began to throw rocks and bottles at ofcrs . We have one ofcr injured( Unk extent). https://t.co/nYMbwTUsxj

The condition of the officer is unknown, and an ambulance was called to the scene.

Video from independent news service RMG News showed a smashed out window on an LAPD cruiser as well as protesters toppling barriers and tagging graffiti outside of the U.S. Courthouse at 350 W. 1st St.

A tactical alert is utilized to ensure resources are available for other calls for service while many resources are dedicated to a particular incident. The alert was deactivated before 11 p.m., Los Angeles Police Department Officer Drake Madison said. -LA Daily News

Footage from Tuesday night reveals "far-left pro-abortion rioters" being corralled by police, who are then "threatened by the mob," according to journalist Andy Ngo (h/t Summit News).

Interestingly, the Department of Homeland Security had forces present as you can see in the footage below.