After April's modest bounce (off decade lows), UMich Sentiment Survey was expected to fall back a little... instead it puked to new cycle lows... The headline sentiment index plunged to 59.1 from 65.2 in April, its lowest since 2011. A gauge of current conditions dropped to 63.6, the lowest in 13 years, while a measure of future expectations declined 6.2 points, erasing most of April’s gains. 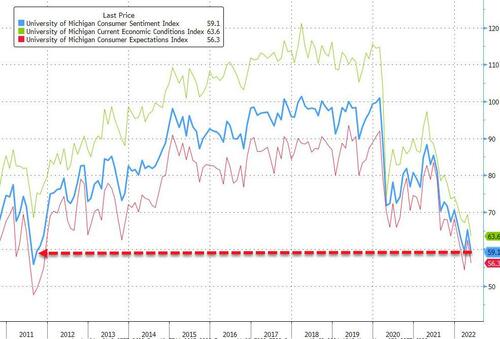 These declines were broad based and visible across income, age, education, geography, and political affiliation--continuing the general downward trend in sentiment over the past year.

Consumers' assessment of their current financial situation relative to a year ago is at its lowest reading since 2013, with 36% of consumers attributing their negative assessment to inflation.

“Inflation remains on the forefront of consumers’ minds,” Joanne Hsu, director of the survey, said in a statement.

“They mentioned inflation throughout the survey, whether the questions referred to their own personal financial situations, their outlook for the economy, or buying conditions.”

The median expected year-ahead inflation rate was 5.4%, little changed over the last three months, and up from 4.6% in May 2021. The mean was considerably higher at 7.4%, reflecting substantial variation in price changes across types of goods and services, and in household spending patterns. At the same time, long term inflation expectations remain well-anchored with a median of 3.0%, settling within the 2.9 to 3.1% range seen over the last 10 months. 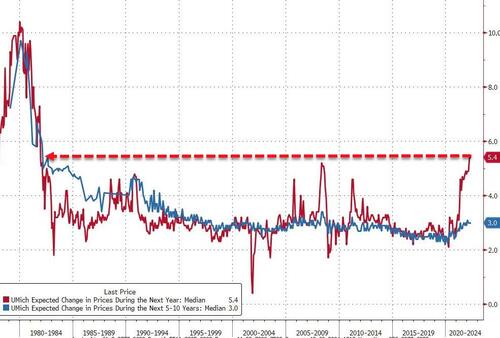 Buying conditions for durables reached its lowest reading since the question began appearing on the monthly surveys in 1978, again primarily due to high prices. 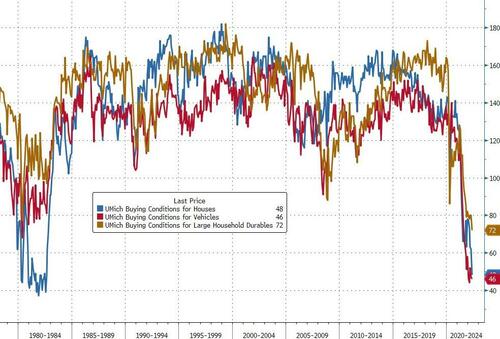