The Internet Party One citizen... one vote... zero government interference.
updated 10:48 PM, Jul 6, 2022 UTC
Headlines:
Huge rent price spikes may be coming to an end: Data: Zumper; Chart: Axios Visuals Rent prices have soared over the last year, b
Study: Most reporters don't believe in 'equal' cover: When it comes to equal treatment of all sides in the news, the public expects far
: Target expands promotions for students and teacher: Target back-to-school plans include deeper discounts, which could be a welcome per
Norway-Russia Tensions Escalate Over Sanctions Impac: Norway-Russia Tensions Escalate Over Sanctions Impacting Arctic Islands Authored
Kamala Harris ‘seriously’ roasted for repetitive: Vice President Kamala Harris was “seriously” skewered online for a repetitive,
Court won't block Mississippi's abortion trigger ban: A judge in Mississippi on Tuesday denied a request from the providers asking to te
Bank of Canada Hikes Another 50, Warns It Is "Prepared To Act More Forcefully If Needed"

As expected, the Bank of Canada hiked the overnight rate by 50bps to 1.50%, its second consecutive 50bps rate hike in a row, and delivered a hawkish statement that raised worries about inflation pressures intensifying and becoming entrenched at elevated levels; specifically, the Governing Council said it is prepared to act "more forcefully if needed" to meet its commitment to achieving the 2% inflation target.

Policymakers conceded that inflation is rising faster than their April forecasts, and “will likely move even higher in the near term before beginning to ease.”

A redline of the hawkish BOC statement is shown below, courtesy of Newsquawk 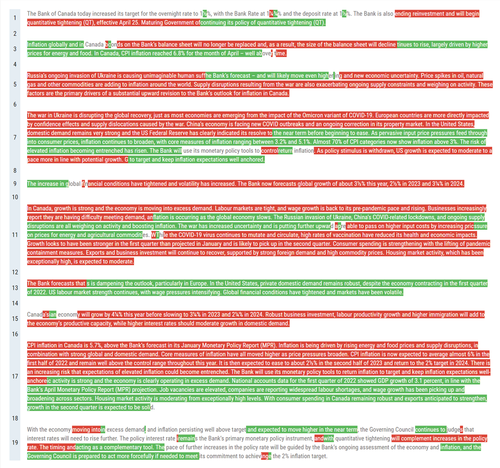 While the 50 basis point hike was expected, the language will fuel speculation that policy makers led by Governor Tiff Macklem are considering a faster pace of tightening than they have been suggesting, according to Bloomberg. Currently, markets are pricing in another half-point increase at the July 13 meeting, before slowing the pace of tightening in the second half of this year. The central bank is seen stopping around the 3% mark.

The central bank “is prepared to act more forcefully if needed to meet its commitment to achieve the 2% inflation target,” the Bank said in the statement.

“The risk of elevated inflation becoming entrenched has risen,” the officials said, adding that they will use their tools to return inflation to target and keep expectations “well-anchored.”

More in this category: « The Tell: Why India is set to win big as EU bans Russian oil imports Commodities Corner: Will OPEC+ fill the gap as Russian oil output falls? Don’t count on it. »