The Internet Party One citizen... one vote... zero government interference.
updated 10:48 PM, Jul 6, 2022 UTC
Headlines:
Huge rent price spikes may be coming to an end: Data: Zumper; Chart: Axios Visuals Rent prices have soared over the last year, b
Study: Most reporters don't believe in 'equal' cover: When it comes to equal treatment of all sides in the news, the public expects far
: Target expands promotions for students and teacher: Target back-to-school plans include deeper discounts, which could be a welcome per
Norway-Russia Tensions Escalate Over Sanctions Impac: Norway-Russia Tensions Escalate Over Sanctions Impacting Arctic Islands Authored
Kamala Harris ‘seriously’ roasted for repetitive: Vice President Kamala Harris was “seriously” skewered online for a repetitive,
Court won't block Mississippi's abortion trigger ban: A judge in Mississippi on Tuesday denied a request from the providers asking to te
Ray Dalio Warns "Reducing Inflation Will Come At A Great Cost"

For me, hearing supposed “experts” talk about what’s now happening in the markets and economy is like listening to nails scratch against a chalkboard because they are typically saying incorrect things in an erudite rather than commonsense way.

Markets and economic movements are driven by much simpler and more commonsense linkages than most people articulate. I tried to describe the most important of these in my 30-minute animated video “How the Economic Machine Works" and I tried to lay out for you how I saw the paradigm shifting over the last 18 months in “The Changing World Order: The New Paradigm," which have more of the specifics than I will cover here.

Here, I just want to talk about fighting inflation and what’s happening pertaining to it. 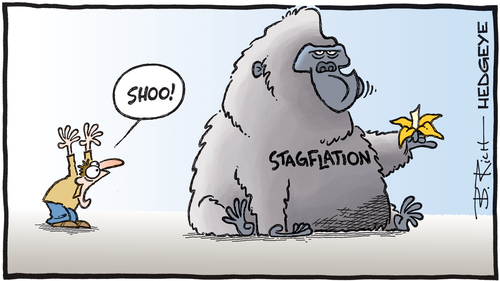 More specifically, I now hear it commonly said that inflation is the big problem so the Fed needs to tighten to fight inflation, which will make things good again once it gets inflation under control. I believe this is both naïve and inconsistent with how the economic machine works.

That’s because that view only focuses on inflation as the problem and it sees Fed tightening as a low-cost action that will make things better when inflation goes away, but it’s not like that. The facts are that: 1) prices rise when the amount of spending increases by more than the quantities of goods and services sold increase and 2) the way central banks fight inflation is by taking money and credit away from people and companies to reduce their spending. They also take buying power away by raising interest rates, which...

More in this category: « The Moneyist: ‘I missed the bus on Bitcoin, but now feel like my time has come. I have another 25 years of a boring 9-to-5 job.’ Is the crypto crash an opportunity to buy low? Market Extra: As U.S. stocks rebound, analysts warn signs of genuine “capitulation” remain elusive »