A natural gas gathering and processing facility near Medford, Oklahoma, exploded Saturday afternoon and could disrupt the flow of hydrocarbons to energy export hubs on the Texas Gulf Coast.

Oneok, Inc., a leading midstream service provider and the operator of a major natural gas liquids (NGL) systems, experienced an explosion at its NGL fractionation facility in Medford, about 85 miles south of Wichita, Kansas. 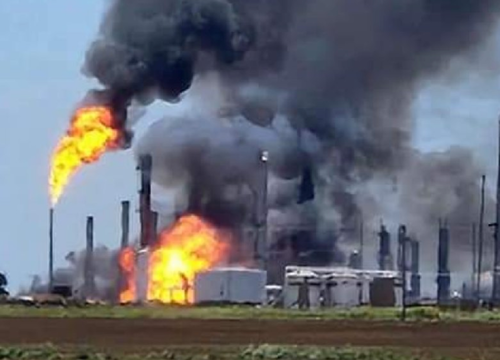 "There is an active incident at the plant south of town, and we are asking all residents south of Main Street to evacuate your homes and go to the Medford public school building," the Grant County Sheriff's Office noted on Facebook yesterday.

Michael and Brittany Stone captured this video of an explosion in Medford, Oklahoma, near the Kansas border. This gas plant fire caused evacuations and road closures #KWCH12 pic.twitter.com/V8Cy8FbYfM

ONEOK released a statement later in the day that said, "there was an incident at ONEOK's Medford natural gas liquids fractionation facility ... All ONEOK personnel are accounted for, and we are unaware of any injuries at this time. We are cooperating with local emergency responders and appreciate their quick response. Our focus continues working with emergency responders to extinguish the fire and the safety of the surrounding community and our employees."

ONEOK's fractionation plant separates NGLs into NGL products, such as ethane, propane, butane, and natural gas, used widely in all sectors of the economy. NGL products are used in inputs for petrochemical plants, generating electricity at...

More in this category: « : It’s time to buy the selloff in energy stocks, starting with these 4 names : ‘Fewer signed contracts, fewer bidding wars’: A slowdown in Manhattan real estate may be a grim warning for the U.S. housing market »