College Endowments Suffer Their Worst Performance In Since The Financial Crisis

Just hours ago we wrote about how pension plans suffered a terrible year for returns. It looks like college endowments weren't far behind.

Endowments fell a median -10.2% before fees, according to a new Bloomberg report, in the twelve months before June. Data by Wilshire Trust Universe Comparison Service showed that larger funds fared better, actually eeking out a small gain of 0.9%.

Large funds often have more exposure to PE funds which - at least until everyone decides to mark their books to reflect reality - offered what Bloomberg called a "buffer" against equity market losses.

Over the period, the S&P fell 12%, causing smaller endowments to suffer. Mike Rush, a senior vice president at Wilshire, said: “Other than investing in cash, which obviously is not the answer, the second quarter was literally one of the worst quarters for investing. Endowments have this prudent diversifier into alternatives that helped out at least the relative returns during the second quarter.” 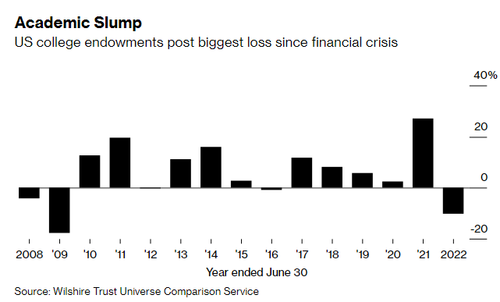 PE investments have "helped juice returns in recent years", Bloomberg noted. But, as many know, these investments can often be marked at valuations that may not truly reflect the current market's appetite for risk. We'll have to see how future periods play out in terms of how PE investments wind up being priced...

Regardless, "median private equity returns decreased as the fiscal year progressed per quarter, from a gain of 5.3% in the quarter beginning in July 2021 to a loss of 0.3% in the most recent quarter," the report said.

In the prior year, endowments returned a median 27%, marking their best results since 1986. Large funds posted a median gain of 34% last year, helped along...

Read 85 times
Tweet
Published in Economics
More in this category: « Best New Ideas in Money: So, are we in a recession or what? Revolution Investing: Five reasons high-flyers in the stock market will crash down to earth »
back to top