Overall global gold demand fell to its lowest first-quarter level since 2008, driven by a slump in demand for gold bars and exchange-traded funds backed by the precious metal, according to a report from the World Gold Council released Thursday. 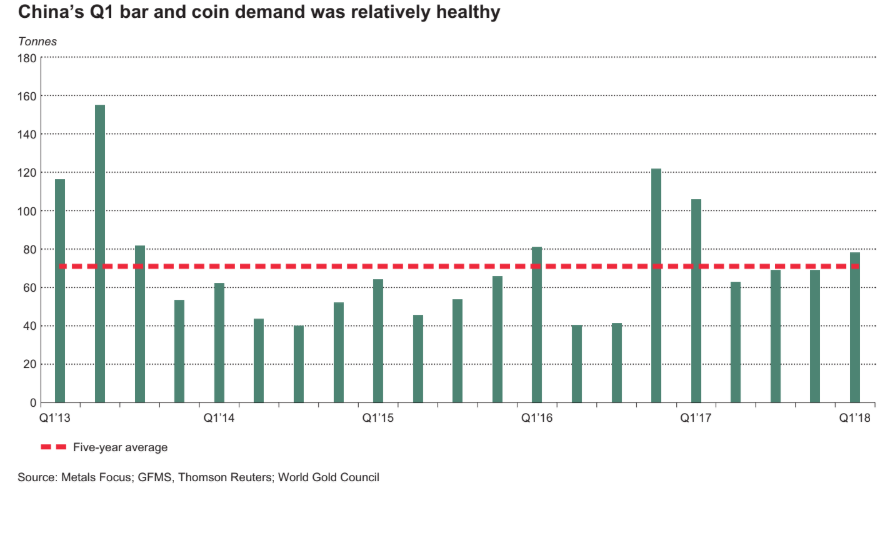 China’s bar and gold demand fell 26% in Q1 year over year, but remained “relatively healthy,” says WGC. Gold futures GCM8, +0.39%[2]  rose less than 1.4% in the first quarter. They settled Wednesday[3] at $1,305.60 an ounce — the lowest for a most-active contract since March 1 — then moved up in electronic trading following the latest U.S. Federal Reserve monetary policy statement. First-quarter global bar and coin demand, meanwhile, was at nearly 255 metric tons, down 15% from the same time last year, the WGC report said. That came as demand in China, the world’s largest bar and coin market, fell 26% year over year, to 78 metric tons. Worries around the strength of the yuan, which caused investors to “flock to gold to protect their wealth 12 months ago, have eased,” the report said, with the yuan having appreciated by around 9% since the end of March 2017. ETF inflows took a huge 66% hit, to stand at 32.4 metric tons in the first quarter, from 96 metric tons in the same quarter a year earlier. “A relatively stable gold price and rising interest rates contrasted with sharp equity-market volatility and periods of heightened geopolitical risk to create mixed signals for gold investors” in the first three months of this year, the WGC report said. References^ Data from the U.S. Mint showed (www.usmint.gov)^ GCM8, +0.39% (www.marketwatch.com)^ settled Wednesday (www.marketwatch.com)

Read 505 times
Tweet
Published in Economics
More in this category: « China's Long Game In Korea Eurasia Is Torn Between War & Peace »
back to top