As a Scottish actor with a fine brogue, James McArdle is an unlikely candidate to play Louis Ironson, the gay, Jewish, verbose New Yorker in Tony Kushner’s epic, two-part play, “Angels in America: A Gay Fantasia on National Themes[1].”

But McArdle, who hails from Glasgow, has thrown himself into the hefty part fearlessly, despite initial fears of performing in the play’s hometown of New York City. The production originated at the National Theatre in London last year.

“Maybe this is naïve but I’m talking about my industry specifically, I feel you get a fair shot here, whereas back home we’re entrenched in a class system and fame system,” McArdle says. “All that is an element here, but I do feel there’s a sense of, if you can give it we’ll give you an opportunity.”

With “Angels,” McArdle has made his Broadway debut and is nominated for Drama Desk and Drama League Awards for his performance. The play is set in 1980s New York and explores themes such as homosexuality, politics, civil rights, death and AIDS.

McArdle’s Louis is wracked with guilt over abandoning his ex-boyfriend, Prior Walter (played by Andrew Garfield), after Prior has contracted HIV. Louis finds refuge in long ruminations about politics and American Democracy — and the arms of his Republican lawyer colleague, Joe (Lee Pace).

“I never played a part where the response is so different every night to a character,” McArdle says. “Louis is trickier than any other part, the moral ambiguity surrounding him.”

McArdle, 29, talked with MarketWatch in his dressing room at the Neil Simon Theatre before a recent performance of “Angels in America.” 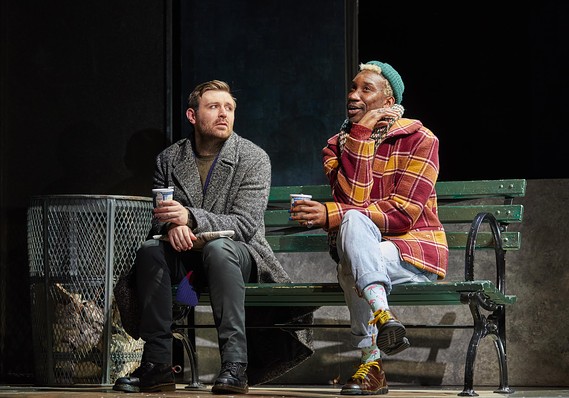 How has performing the play here in New York, where it is set and where Kushner is from, differed from doing it in London?

I think it’s really deepened our understanding of the play. What’s fantastic is the response from the audiences, who understand every reference. It gives the play a new vitality and a new heat because the play’s come home. It feels vital and immediate — it did in London as well but I think the stakes are raised here. That man [Donald J. Trump] is the president, and it’s time to put “Angels in America” on Broadway again.

They’re much more vocal in terms of Louis. I think a lot of people see themselves in him. I had to be unapologetic about it and it’s been liberating. I’m leaving it up to them to decide. I have to go to the darker moments and go into the selfish moments. It’s fun as an actor to do that with abandon. In London I was trying to control certain elements of the character that by...

More in this category: « Giuliani "Clarifies" His Recent Comments The Next Recession Is Closer Than You Think »