So far, so good for investors. Wall Street isn’t sweating President Donald Trump’s decision to withdraw the U.S. from the Iran nuclear agreement and reimpose sanctions on Tehran.

But will the calm hold? Much will depend on the reaction by Iran as well as by other participants in the multilateral agreement that was designed to curb the country’s nuclear program in return for sanctions relief and economic incentives.

The last time sanctions were imposed in 2012, Iran’s oil output fell by around 1 million barrels a day, while oil prices jumped by around 15%, noted Thomas Pugh, commodities economist at Capital Economics, in a Wednesday note. 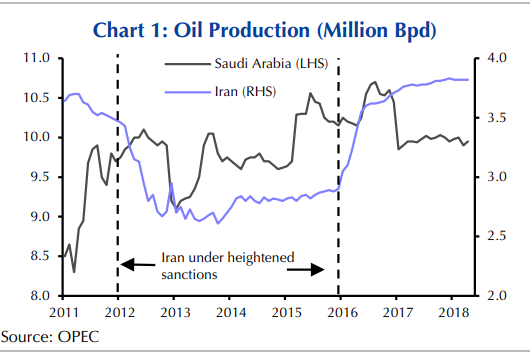 After sanctions were lifted, oil exports rebounded, hitting pre-sanction levels near 2.3 million barrels a day in 2017, or around 3% of global supply, said Ashray Ohri, a Mumbai-based economist at ICICI Bank, in a note. But Iran’s customer base has shifted. While exports to European countries, South Korea and Japan, which were slashed during sanctions, partially recovered, China and India largely filled the gap (see charts below).

The renewed sanctions are expected to dent European demand for Iranian oil, even though European countries, which tried in vain to convince Trump not to exit from the deal and expressed disappointment in the decision, are maintaining the 2015 accord.

A crucial consideration surrounds whether the EU reimposes sanctions on shipping insurance for vessels carrying Iranian crude—an element that was crucial in disrupting the country’s oil exports during the previous round of sanctions, Pugh noted. As long as Iran continues to abide by the nuclear pact, it’s possible that Brussels won’t make that move, which would mean Iran would remain able to export oil to countries...

More in this category: « Mossberg Becomes Second Firearms Co. To Cut Off Dick's Mystery Of The Missing Wage Growth »