The Internet Party One citizen... one vote... zero government interference.
updated 2:18 PM, Sep 23, 2020 UTC
Headlines:
The Debt Crisis Is Mounting For Oil Economies: The Debt Crisis Is Mounting For Oil Economies Tyler Durden Wed, 09/23/2020 - 10:05
University of Cincinnati professor on leave for call: A University of Cincinnati professor is on administrative leave for referring to C
House Democrats, Trump administration strike deal to: House Democrats have reached a deal with the Trump administration on legislation t
House passes legislation to crack down on business w: The House on Tuesday overwhelmingly passed legislation aimed at tamping down the e
Jailed Morocco journalist probed by court on rape ch: RABAT, Morocco (AP) - A Moroccan journalist and human rights activist held by auth
The Margin: ‘The only Republican with morals is a : It wasn't all that long ago that Mitt Romney was cheered by the left as a ray of l

Just when it feels like the market might finally topple and give desperate bears their long-awaited told-ya-so moment, a stubborn streak like the one the Dow DJIA, +0.46%[1]  is currently riding proves again who has the upper hand: The bulls.

Yes, despite all the hand-wringing over tightening, lofty valuations, nasty politics, [insert any number of reasons to sell], this market still belongs to the bulls. The blue chips’ stretch of seven positive sessions [2]is the longest since November of last year, and much of the backbone of this little rally can be attributed to some stellar corporate earnings.

Whether it can continue is another question, but there’s a strong case to be made this market has a backstop in the explosion of buybacks lately.

Here’s a graphic from a Barron’s piece on the subject[6]:... 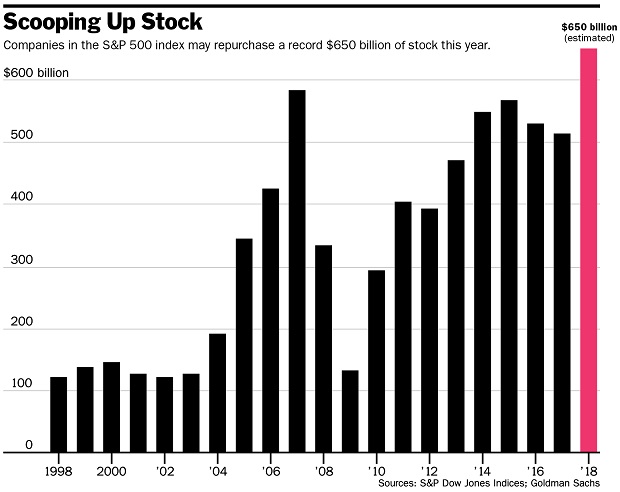 “With this kind of corporate buying pressure in the market, it’s very hard for shares to crash,” writes Wolf Richter of the Wolf Street blog[7] in our call of the day. “Companies will pile into the market at every dip and buy as high as possible. It’s unlikely the overall market can crash this year no matter what happens.” Historically, companies that buy back their own shares outperform the broader market. The Wall Street Journal reported the 20 biggest buyback spenders in the first quarter are up over 5%, on average, since the start of the year to easily beat the S&P. Richter points out that there’s an added tailwind to the buybacks, considering companies are bringing back cash piles from abroad that’s the Trump administration’s new tax regime. While the idea was for companies to bring back that money and invest it in growing their U.S. operations, it’s not exactly playing out that way. “Everyone knew this was a pretext for a corporate tax cut that would free companies to do what they’d done during the last ‘repatriation holiday’ in

More in this category: « Israel Kills 28, Injures 600 In Gaza As Palestinians Protest Opening Of US Embassy In Jerusalem Sears Shorts Crushed After Company Starts Process To Sell Assets (To Eddie Lampert) »