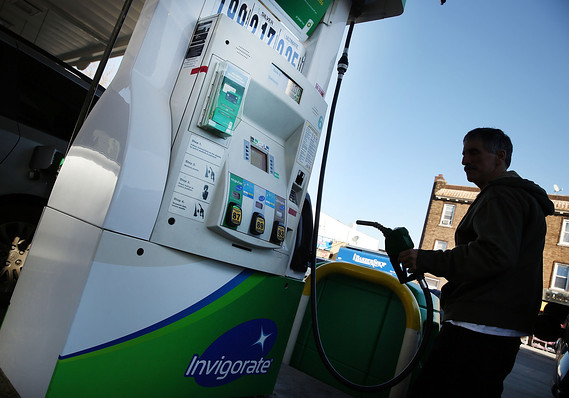 It’s a question on everyone’s minds, as gas prices tip toward $3 a gallon nationally and campaigning for midterm elections heats up — will the rise in gas prices offset the benefit of the tax cuts?

The general rule of thumb is that every 1 cent per gallon more results in $1 billion less in consumption per year.

At $3 per gallon — the nice, round number that’s been thrown around as OPEC has successfully restricted supply and the U.S. imposes sanctions on Iran — that’s 58 cents over the 2017 average, and therefore, $58 billion less in consumption.

Read: U.S. gasoline prices could top $3 this summer thanks to Iran and Venezuela[1]

Of course there’s no guarantee a gallon of gas will average $3 for the full year, especially given that through four months of the year it’s averaged $2.62 per gallon. If gas averages $3 per gallon for the rest of 2018 — which isn’t far fetched — then the average price will be $2.87 per gallon, implying $45 billion less of consumption per year.

Then you have to look at the impact of the tax cuts. The Joint Committee on Taxation estimates that, on net, the U.S. government will bring in $122 billion less in taxes for individuals in calendar year 2018.

Using those numbers, gas averaging $3 per gallon the rest of the year would eat up 37% of the tax cuts.

Sell-side estimates are of similar magnitude. Morgan Stanley ran numbers assuming gas would average $2.96 per gallon, and said it would wipe out $38 billion in consumption or a third of the tax cuts, according to The Wall Street Journal.

Oxford Economics ran the numbers based on crude-oil prices CLM8, +0.45%[2]  — and included not just the impact of the Tax Cuts and Jobs Act but also the budget bill passed this year. They found if crude-oil prices averaged $70 a barrel this year, half of the fiscal boost would be eroded.

Economists at Jefferies examined the issue and pointed out that current gasoline consumption, as a percentage of total consumption, is near 18-year lows. So even a 30% spike would only approach the 18-year average, they noted.

Looking at different stock market sectors, they found that when there was a 30% increase in gas prices, energy and utility stocks do the best six months after, while consumer discretionary and telecommunications services do the worst.

One other factor to consider is that the distribution of the gasoline price rises and...