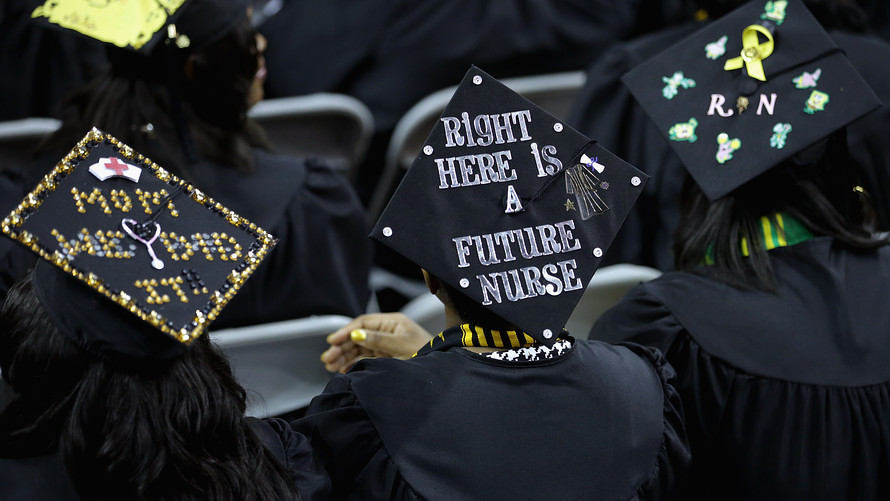 Earlier this month thousands of high school seniors decided where to go to college after several months of angst. New research suggests that angst may be better directed at choosing a field of study.

The median earnings for bachelor’s degree recipients is about $62,000 a year, according to an analysis of government data by Georgetown University’s Center for Education and the Workforce. But the difference in median annual earnings of bachelor’s degree recipients with the highest paying majors and those with the lowest paying majors is $39,000. (That’s approximately the median down payment for a home[1].)

“Where you go doesn’t matter so much anymore, it matters what you take,” said Anthony Carnevale, the director of CEW and the co-author of the study.

The change is the result of economic forces that began in the 1980s and have resulted in a labor market with hundreds of different jobs with specific skill profiles, Carnevale said. While it’s necessary to get some education beyond high school to get a decent paying job in the bulk of those fields, there’s a much stronger correlation than in the past between those specific fields and the college education required for them, he said.

That relationship means that in certain fields an associate’s degree might be enough for a worker to earn a decent living, while in others they’ll need to get some kind of graduate degree. The median earnings of a worker with a graduate degree in education is roughly the same as of a worker with an associate’s degree in science, technology, engineering and math, the analysis found.

Despite those diverging fortunes, it’s still true that within fields more education means more money on average, Carnevale said. Students who aren’t sure what to study are safest going for at least a bachelor’s degree, he said.

Those who are dead set on a less lucrative field shouldn’t lose all hope. Workers in the 75th percentile of earnings for liberal arts and humanities degrees earn more than those in the 25th percentile of architecture and engineering majors, the analysis found. Still, other research indicates that pursuing a low-paying degree is increasingly a luxury[4] only students at relatively selective schools can afford. On the other hand, students pursuing high paying fields can study them at less prestigious schools with little long-term detriment to their earnings, Carnevale said.

But there are certainly benefits to attending a prestigious and well-resourced school. These colleges tend to spend more on their students, which means they provide them with the support that will give them pretty good odds of graduating.

“If you go to a less-prestigious school, you’re much more on our own,” Carnevale said. ...

More in this category: « European Council President: "With Friends Like Trump, Who Needs Enemies" Conservatives In An Uproar After Twitter Deploys Draconian Shadowban Filter »