Bank on it? UBS predicts Germany will win World Cup

Proving once again that bank analysts get bored just doing financial analyses, forecasters at Swiss-based UBS are predicting the winner of the upcoming World Cup — and it’s Germany.

In a lengthy note issued Thursday [1]by UBS Investment Research, the defending World Cup champions were forecast to come out on top again, following exhaustive research by a team of 18 analysts and 10,000 computer simulations of the tournament. The analysts used factors such as team strength, qualification record and past World Cup performance.

“Germany and Brazil are set for an easy start, while Spain will have to hit the ground running if they are to beat Portugal, the current European champions, in their opening game,” Michael Bolliger, head of UBS’s emerging-market asset allocation, said in the report.

In a bit of a surprise, perennial disappointment England is ranked fourth-most likely to win, at 8.5%. France, Belgium and Argentina are also seen as dark-horse contenders.

“England has a balanced team, an attribute that complements teamwork and can transform a successful team into a future champion,” Mark Haefele, chief investment officer at UBS Global Wealth Management, said in a statement.... 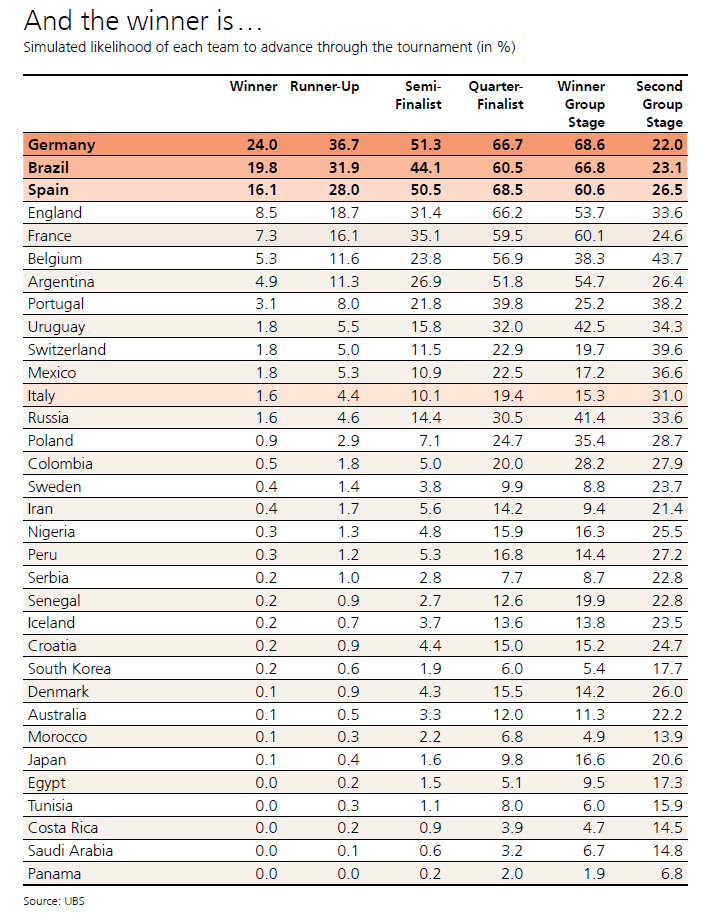 “No matter whether they are analyzing global markets or soccer tournaments, people tend to be biased towards local favorites,” Haefele said. “The same quantitative discipline that the chief investment office applies to investments has proven useful in successfully looking beyond a home bias in portfolios and sports events.” Of the 32 teams in the tournament, UBS says 20 have less than a 1% chance of winning (sorry, Iceland). The analysis included a 33rd team, Italy, which did not qualify for the World Cup, as a “tribute” to the four-time champions. The U.S. team also did not qualify. But before you place a fat bet on Germany, take note of past results. In 2014, UBS UBS, -0.06%[2]   predicted Brazil — which lost to Germany in the semifinals — to prevail. In 2016, Goldman Sachs Group Inc.’s GS, -0.77%[3]   economic research team joined the fray, and incorrectly picked France [4]to win the UEFA European Championship, which was won by Portugal. The World Cup kicks off June 14 in Russia. References^ In a lengthy note issued Thursday (www.ubs.com)^ UBS, -0.06% (www.marketwatch.com)^ GS, -0.77% (www.marketwatch.com)^ incorrectly picked France (www.businessinsider.com)

Read 621 times
Tweet
Published in Economics
More in this category: « US Demands North Korea Start Giving Up Its Nukes And Missiles Within 6 Months Big Brother: Police Raid Home Of Man Who Posted Pictures Of His Mushroom Dinner On Facebook »
back to top