A stronger dollar and rising U.S. Treasury yields have put the hurt on Turkey and Argentina. Economists wonder if the pain could soon spread across emerging markets.

The U.S. dollar, measured via the ICE U.S. Dollar Index DXY, +0.40%[1] a gauge of the greenback against a basket of six major rivals, has jumped 4.2% since the end of the first quarter, having hit a string of 2018 highs in May. It’s up 2% in 2018, after dropping almost 10% in the previous year. This resurgence in the greenback paired with the Federal Reserve’s gradual path to monetary policy normalization makes dollar funding more expensive for emerging market borrowers.

Check out: Being long the dollar is cool again[2]

Also see: The strong dollar is a stock-market drag and poses a threat to earnings growth[3]

Although both Argentina and Turkey struggle with additional idiosyncratic issues, their reliance on dollar-denominated debt is a big part for why their currencies sold off. The Argentine peso USDARS, +0.6356%[4]  hit a record low against the buck earlier this month, while Turkey’s lira USDTRY, +3.6538%[5]  fell to a fresh historical low against the U.S. unit on Wednesday amid a continued slide across the board in emerging market currencies.

Read: Argentina may be headed for another currency crisis[6]

“We turned more cautious on emerging markets in February and signaled substantial overvaluation for the Argentinian peso and Turkish lira,” wrote analysts at the Institute of International Finance, led by chief economist Robin Brooks. “Both currencies have fallen sharply since then, but spillovers to the rest of the EM complex have been limited so far.”

Yet, there are others, most notably South Africa, Colombia, Egypt, Mexico and Indonesia, which could also suffer, they said. They focused on nonresident portfolio flows into those countries, which have risen to levels last seen in 2013 and signal the potential for turbulence if the flows reverse. 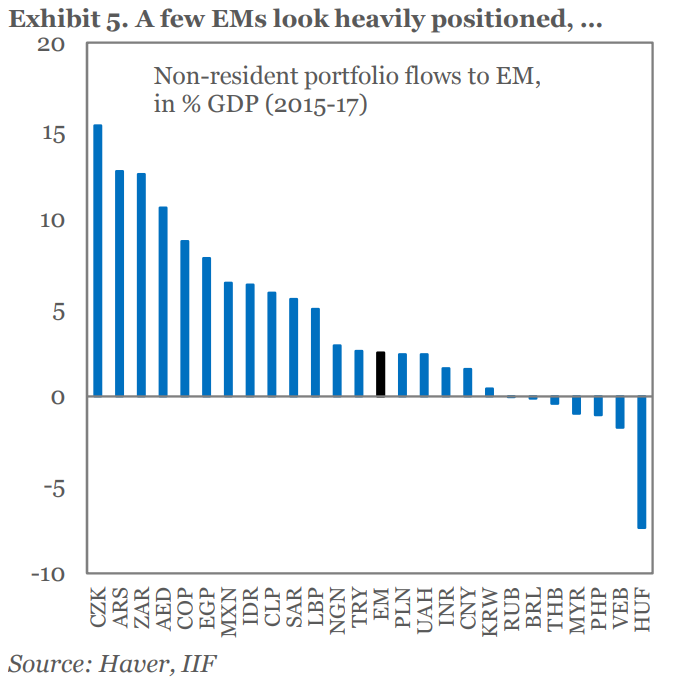 More in this category: « Deutsche Bank To Fire 10,000 Employees: 1 In Every 10 New Home Sales Slide In April As Average Price Spikes To Record High »