The plunge in oil prices this week won’t be enough to save drivers from paying $3 a gallon as soon as this Memorial Day weekend.

As of Friday morning, regular unleaded gasoline prices averaged $2.981 a gallon, according to GasBuddy[1]. That’s up 5.8 cents from last week’s average, and up a whopping 60 cents from last year’s average. 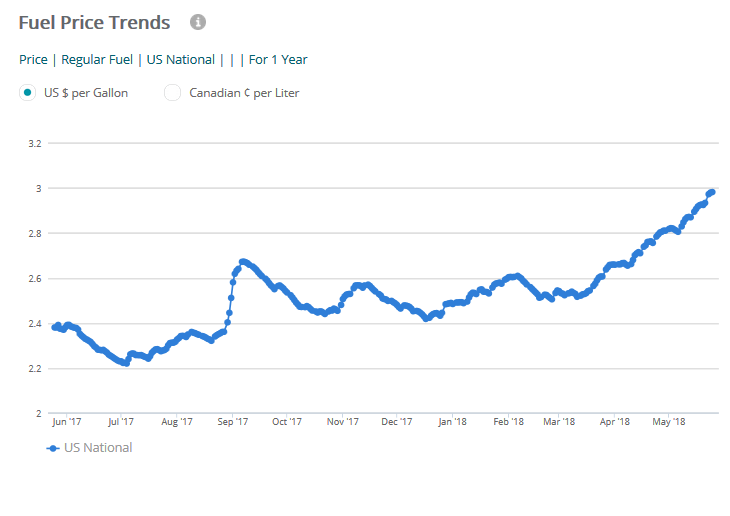 Average prices in 17 states have already topped $3 a gallon, including Hawaii, California, Alaska and Washington, he said.

The recent plunge in prices for oil won’t immediately help lower gasoline prices at the pump, though retail prices for the fuel will eventually cool, said DeHaan.

If members of the Organization of the Petroleum Exporting Countries do indeed raise production as is rumored, “the peak we see in the next few days may be the high water mark this summer,” he said.

Media reports said that OPEC and non-OPEC oil producer Russia are discussing plans to lift their production for the first time since 2016. Reuters reported that they’re considering[4] a 1 million barrel a day increase in output.

“With the U.S. oil production continuing to rise, it was always a matter of time before the OPEC responded,” said Fawad Razaqzada, market analyst at Forex.com. “Lo and behold, Saudi Arabia’s energy minister Khalid Al-Falih today said that consumers should be concerned about potential oil shortages and so…OPEC needs to make sure oil supply is adequate.”

“He more or less confirmed that there will be some adjustments to the current OPEC+ agreement after the 22 June meeting in Vienna, but insisted that the release of supply will be a gradual process,” said Razaqzada.

Under the production agreement, OPEC and other major producers, including Russia, agreed to cut output by roughly 1.8 million barrels a day through the end of 2018 as part of an effort to work off a global glut that had tanked prices between mid-2014 and early 2016.

OPEC has managed to produce even less than the curbs allow, in large part due to output issues in Venezuela linked to its economic crisis. WTI oil now trades around 39% higher and futures prices for gasoline ...

More in this category: « Treasurys Have The Worst Start To The Year Since The Great Depression Where America's Debt Slaves Are The Most Vulnerable »