Contrarians continue to wait patiently for when gold-market sentiment will support a strong rally. Very patiently.

That’s because it’s been more than a year since sentiment among gold market-timers was so pessimistic that a contrarian buy signal could even be considered. Since then, the gold-timing community has been quick to turn bullish at any sign of gold market strength and reluctant to turn bearish at any sign of weakness[1] in the yellow metal. GCQ8, -0.52%[2]

That behavior is just the opposite of the “Wall of Worry” that bull markets like to climb.

Consider the average recommended gold market exposure level among short-term gold timers I monitor (as represented by the Hulbert Gold Newsletter Sentiment Index, or HGNSI). Even though gold today is more or less at the same level where it stood a month ago, the timers’ average exposure level has increased from 21.7% to 34.8%. (See chart, below.)... 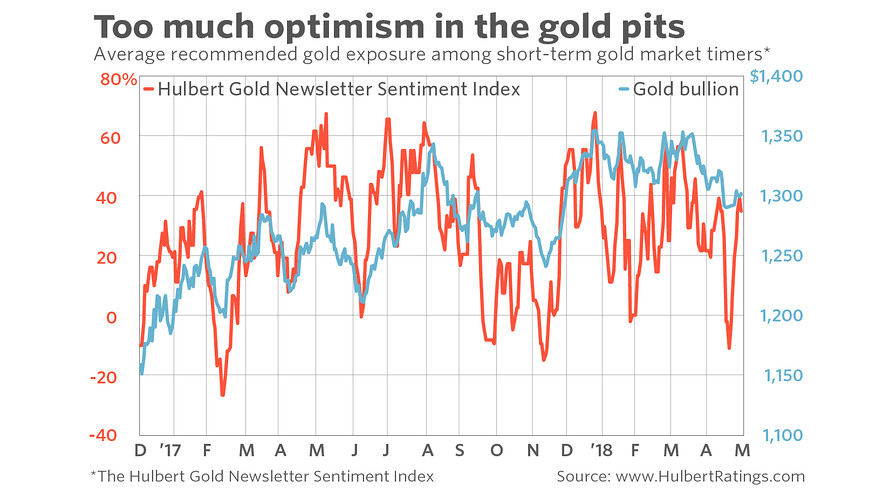 Since the normal pattern is for recommended exposure levels to rise and fall along with the market, this increase over the last month shows that the gold timers are increasingly viewing the gold market glass as half-full rather than half-empty. That’s not a good sign from a contrarian point of view. This pattern was particularly evident earlier this week when the political and economic crisis in Italy made it onto the front-page headlines. Gold bullion itself barely budged, yet the average short-term gold timer I monitor increased his recommended gold market exposure level. In recent years, the sentiment lows that supported the most tradable rallies came when the HGNSI dropped to at least minus 30%. As you can see from the chart, this sentiment index hasn’t come close to that level since March of last year. Take gold’s drop below the psychologically important $1,300 level in mid-May. One would have guessed that this would have been particularly discouraging to the gold timers, since it dashed their hopes that gold’s April rally to above the $1,350 level was the beginning of something bigger. Yet the lowest level to which the HGNSI dropped in mid-May was minus 10.9% — a far cry from the minus 30% level that has preceded past bottoms. One virtue of contrarian analysis is that we don’t need to speculate about what it will take for the gold timing community to throw in the towel. It could be that a precipitous drop in gold’s price to below $1,250 would do the trick. Alternately, gold timers could become extremely pessimistic following an extended period of gold being stuck in a narrow trading range. Regardless, contrarians advise against jumping the gun until that extreme pessimism comes to pass. To be sure, this discussion applies only to those who focus on gold’s short-term trend, since contrarian analysis