Coming off its most subdued week of the year, bitcoin hasn’t traded outside the $7,000 to $8,000 range since May 22, in what many proponents see as a positive sign for increased adoption of the prominent decentralized technology.

Charles Hayter, co-founder of CryptoCompare, said “there’s a lot of debate around if [bitcoin is] a store of value, or possibly a currency and the lower volatility does help those camps.”

The 30-day bitcoin volatility index, which tracks the standard deviation of returns for the past one -month and two month periods, recently put in a one-year low, trading at 2.77%, the lowest level since May 2017 and is down from 8.02% since the beginning of 2018, according to the Bitcoin Worldwide Index[1]. 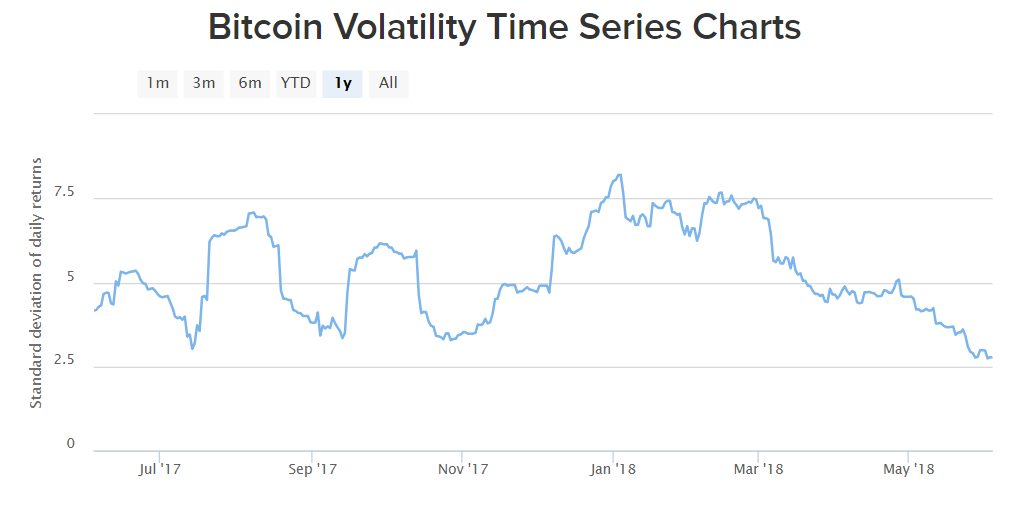 Hayter said such scenarios have played out before and that the reduced volatility may be just a function of the lack of news, especially on the regulatory front.

One person who isn’t buying into the adoption of bitcoin is Jim Chanos. Speaking at the Institute for New Economic Thinking, the famed short seller described bitcoin as a “libertarian fantasy[2]” and it is “the last thing I’d want to own is bitcoin if the grid goes down.”

More in this category: « Will Trump Fire John Bolton Next? The Q1 Results Are In And... Spending On Share Buybacks Hits All Time High »