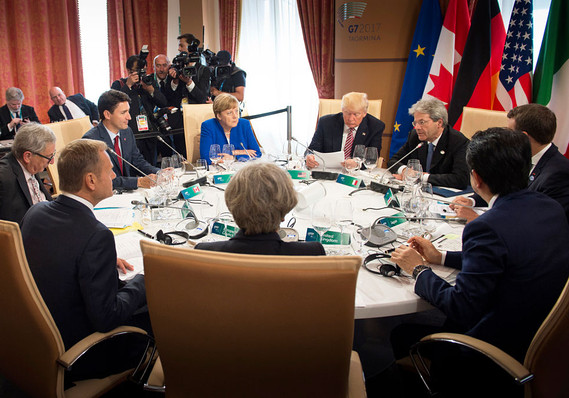 President Trump likes to say that on his watch, the world thinks a lot more of the United States than it used to. “America is being respected again,” he said in Indiana last month.

Just one problem: it’s generally not true—or, to turn one of Trump’s favorite phrases against him, it’s “fake news.”

It’s certainly not true based on conversations with people I’ve encountered during my current six-nation swing through Europe and the Middle East, where Trump’s leadership—with some key exceptions—has met with criticism and contempt. I’ll get to the data on that in just a moment.

This is the part where Trump supporters might say “Who cares what a bunch of foreigners think?” The answer to that simplistic question is multi-faceted. We should care what the world thinks because one in six American jobs is linked to trade. We should care because numerous 21st-century problems defy borders and can’t be solved alone—things like health pandemics, cybersecurity, climate change and more. We need the world because we need access to its markets and military bases. We need its foreign investment. We need the world’s best and brightest young minds to come here to study—and stay, rather than going back to China or India. Who cares what the world thinks? Please.

At the end of the Obama presidency, says a 37-nation survey by the Pew Research Center, a well-respected, non-partisan Washington research center, 64% of respondents had a favorable view of the United States. By the summer of 2017—just five months into Trump’s presidency—that had slipped to 49%. The drop of those saying they had no confidence in the president of the United States was even greater, plunging 42 points to just 22%. Translation: Most of the world respects America—and our president—a lot less than it used to.

As I said—and to be fair—there are exceptions. In two countries—Israel and (think of this what you may) Russia—people have “more confidence in the U.S. president to do the right thing regarding foreign affairs” than they used to. But in the other 35 countries Pew surveyed[1]—in Europe, Africa, Australia, North and South America—that confidence is down anywhere from five to 83 points.

So good luck getting things done, making “deals” or asking for favors from people who don’t seem to like or respect you very much.

Keep in mind, this data precedes the four-front trade war that Trump now has gotten us into. He has picked fights with Europe, China, Mexico and Canada. Canada! Do you know how hard it is to anger Canada—our biggest trade partner and perhaps our best friend on the planet? But Trump has. If there was a Nobel Prize for pissing people off, he’d win hands down.

Trump thinks he can just hit the world with tariffs and they’ll cower. Guess what? They’re hitting us...

More in this category: « Papadopoulos Approached By "Highly Suspicious" Businessman Known As "Source D" From Steele Dossier For $30K/Month Job US Consumer Credit Growth Slows To Weakest In 7 Months »