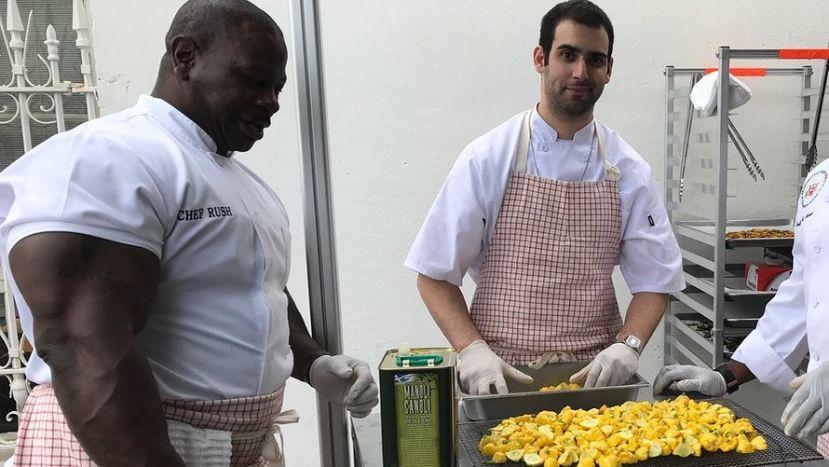 Wall Street Journal reporter Vivian Salama on Wednesday live-tweeted an event at the White House celebrating the Muslim holiday of Ramadan — and one tweet in particular took the internet by storm.

Included in Salama’s tweets was a photo of three White House chefs preparing an iftar dinner. Throughout Ramadan, Muslims fast between sunrise and sunset, and iftar is the evening meal that follows a prayer that ends the fast.

And upon seeing the photo, the internet went wild.

That dude on the left is the size of my refrigerator.

Chef Hulk will be making an entire Halal dinosaur.

That guy can cook for me any day of the week...#seriousmuscles[5]

The good news is he doesn't need to spend any of our tax dollars buying a meat hammer...

So who is this guy, exactly?

His name is Andre Rush, and he’s a retired Army Master Sergeant Chef. According to Salama, he is “a master chef trained in classical plating, baking, cake decoration and a master ice carver.”

The buff chef was one of the more non-controversial moments of the day, which drew criticism from many in the Muslim community, citing President Donald Trump’s rhetoric and actions against Muslims and other religious and racial minorities.

“I was not invited to the White House iftar, but I would not attend if I were,” Dalia Mogahed, director of research at the Institute for Social Policy and Understanding, told CNN[11]. “Attending this event, especially during the holy month, a time of introspection and spiritual growth, would be inappropriate in my view as it would...