The Internet Party One citizen... one vote... zero government interference.
updated 4:25 PM, Oct 20, 2021 UTC
Headlines:
Progressives push back on decision to shrink Biden's: Progressive Democrats in the Senate and House are pushing back against a prelimina
Jan. 6 Committee Votes To Hold Bannon In Contempt: Jan. 6 Committee Votes To Hold Bannon In Contempt Authored by Ivan Pentchoukov vi
Manhunt for Brian Laundrie leads authorities to at l: While the 23-year-old remains on the lam more than a month after skipping out of h
GOP congressman indicted for lying to the FBI: Rep. Jeff Fortenberry (R-Neb.) has been indicted on charges he falsified records a
Federal grand jury indicts Nebraska GOP lawmaker: A federal grand jury on Tuesday indicted Rep. Jeff Fortenberry (R-Neb.) for allege
Biden's Border nominee backs building more border wa: President Biden’s pick to lead the government’s border agency told senators Tu
‘If you thought about it every single day, you’d have a mental breakdown.’

By the Department of Education’s count, as reported by the Journal, Mike Meru, a Utah orthodontist, is in select company. Some 101 people in the U.S., according to the department, are a million dollars or more in federal student-load debt. The number owing at least $100,000 is nearing 2.5 million.

While studying at USC to become an orthodonist — dental school is among the costliest of all postgraduate curricula — Mike Meru, who’d had his undergraduate studies funded by his parents and part-time work as a waiter and graduated debt-free, took out $601,506 in student loans. This Wall Street Journal infographic tracks the debt’s accumulation and expansion: 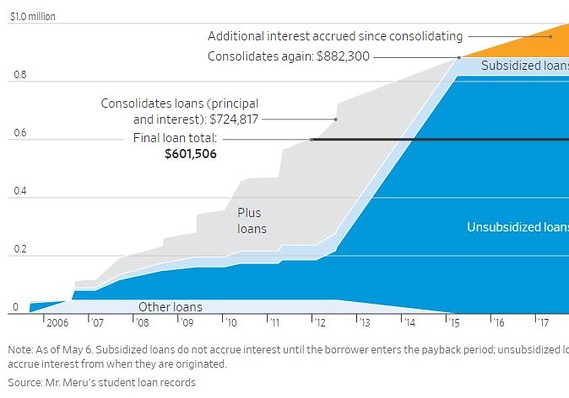 It’s worth noting that the reaction in social media and in the Wall Street Journal comments[2] was not entirely sympathetic, even as the Journal reported that the debt — on which the orthodontist is not even touching the principal with his $1,589.97 monthly payments — could expand to $2 million over time:

There's not a school on the planet that charges $100K a year for undergrad and dentistry. So he was charging, what, all of his living expenses for a decade? My pity meter is sadly broken. https://t.co/sqxSRJ72LN[3]

How utterly ridiculous to borrow that much money and then whine about having to pay it back.

This is entirely their fault....

More in this category: « Watch Live: Trump Delivers Statement At G7 Summit In Canada KFC is right — people are gobbling up ’meat replacements’ »