Dollar muted ahead of Fed decision, as traders shift focus to future hikes 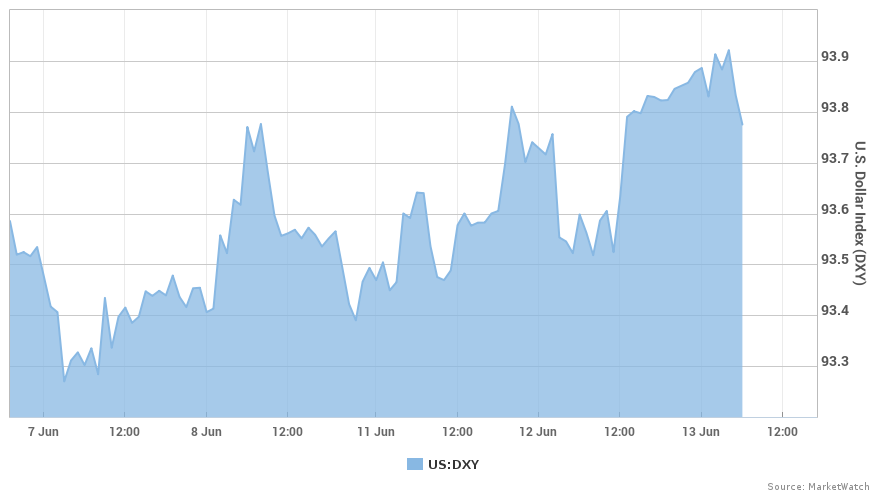 A popular gauge for the U.S. dollar held its level early Wednesday in New York, ahead of the Federal Reserve’s expected interest rate increase.

But dollar traders are looking for more than just a much anticipated hike of 25 basis points, which will push the Fed’s key rate to 1.75%-2% in its seventh tightening since December 2015, as the focus is shifting to what comes next.

Read: How this week could reignite the dollar-yen rally[1]

“Should the Fed lift its projection to four hikes instead of three—via the dot plot—we expect to see the dollar continue its charge higher. Meanwhile, should the Fed stay pat with three rates through the year, we would expect to see the dollar give back some of its recent gains,” said Jasper Lawler, London Capital Group’s head of research, in a note.

Also: Fed goal is to signal an ‘unhurried’ pace of interest-rate hikes[2]

“Markets are currently pricing in a 46% chance of four rate hikes across the year, meaning traders are fairly equally divided. Yet given the backdrop of troubled global trade [relations], the Fed could be keen to hold off a little longer. Consumer price inflation might be at 2.8% but [the PCE price index], the Fed’s preferred measure of inflation, is still at just 1.8%, meaning time is still on the Fed’s side,” Lawler said.

The Fed’s decision is scheduled for 2 p.m. Eastern, followed by Chairman Jerome Powell’s news conference at 2.30 p.m. On Thursday, the European Central Bank’s monetary policy decision is due, followed by the Bank of Japan on Friday.

Read: Five questions likely to be fired at Fed’s Powell on Wednesday[6]

Check out: How stock investors can profit from this week’s Fed meeting[7] ...